“The investment amounted to 10 billion rubles. The project we began long ago, but we sought a concept that would allow us to be competitive in the market. During the implementation, we even saved a little money by speeding up preparation for production,” said Grunenkov. 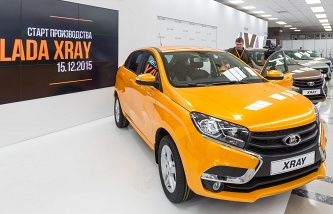 In Russia on Sunday started selling a new model of AVTOVAZ LADA XRay. Her first buyer in Moscow has become renowned stylist Lena Lenin who chose the car in vivid color “fresh”, announced the press center of “AVTOVAZ”.

“LADA delivers on its promises. XRay enters the market at precisely the promised time – car will provide the brand maintain its position in a difficult 2016. High level of equipment in the basic version becomes a tradition for all new models”, – said at the ceremony of start of sales the automaker’s President Bo Andersson.

Sales of LADA XRay began in 124 car dealerships in 57 cities across the country. Each dealer received 6-8 machines in versions of Optima and Top. The vehicles are equipped with engines developing LADA and Renault-Nissan (all motors for XRay are made in Togliatti). Starting price of new items – 589 thousand rubles.

Serial production of LADA XRay started at AVTOVAZ December 15, 2015. Xray – high compact hatchback, made in the style of SUV (Sport Utility Vehicle). The model was created in the framework of cooperation of “AVTOVAZ” with the Alliance Renault-Nissan, for new items we developed more than 500 original parts. As of today the localization level of the car is 50% to 65% depending on the modification.

The production is organized on the most modern Assembly line of “AVTOVAZ”. The car has become the second production model after the LADA Vesta, new brand “X”-style. As previously reported to journalists by the Director of the project LADA XRay Oleg Grunenkov, in 2016, AVTOVAZ plans to produce more than 20 thousand “Israel”, although potentially Assembly line allows to produce up to 60 thousand cars.

“AVTOVAZ” plans to almost double its exports to Egypt in 2016, told reporters the President of the automaker Bo Andersson. 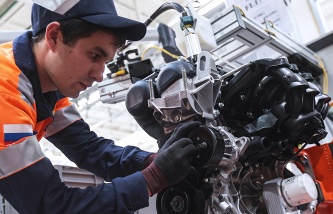 As said in 2015 the head of “AVTOVAZ”, in the future, the company plans to increase sales in Egypt are up to 10 thousand cars. This year in Egypt is scheduled to begin deliveries of the novelties of AVTOVAZ – LADA Vesta and LADA XRay.

Vesta and XRay from April 2016 will be available in Europe. “We are slowly returning to Europe. In December 2015, we have expanded to Hungary LADA cars Granta and LADA Kalina, and now we sell in Hungary for a month about 100 “Grant” and “Calin,” said Andersson.

According to him, the company now is negotiating for the supply of “West” and “Israel” in Europe.”We are currently negotiating with major European importers who could handle the supplies of “West” and “Israel” in 5-6 European countries. We have a clear plan, all our cars are prepared to abide by the rules of the standard “Euro-6″. It is important to find the right importers”, – said the head of “AVTOVAZ”.

20% of the domestic market

AVTOVAZ expects to hold in 2016 a 20% stake in the domestic market with a total market of 1.3 million cars, said Bo Andersson.

“The most important thing for us is to increase revenue and we have a plan. It is very important that our new models LADA Vesta and LADA XRay attracted to our traditional lineup,” said Andersson.

Group net loss of “AVTOVAZ” – the largest Russian manufacturer of passenger cars rose by the end of 2015 according to the international financial reporting standards (IFRS) in comparison with the previous year by 2.9 times to 73.8 billion rubles.