SIMFEROPOL, February 15. /Corr. Elena Bogdanovich/. Laboratory analysis all samples of diesel fuel and two of 13 samples of gasoline, selected on behalf of the government on petrol stations of the main Crimean oil traders showed a mismatch to the standard. This was announced at a meeting of the regional government Deputy Prime Minister Oleg Kazarin.

“Of the 13 samples of gasoline A-92, A-95, two samples do not comply with GOST, – he reported. – 17 samples of diesel fuel 17 is not meet state standards in terms of sulphur content, the temperature limit of filterability, portions of the composition”. 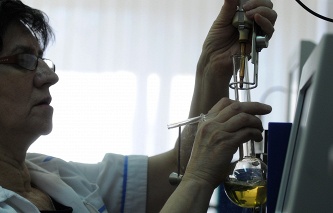 In addition, according to him, fuel is often sold at a higher price, has the same quality, and cheap.

As explained Vice-Premier, the samples tested in the laboratory of the state company “Chernomorneftegaz”, which is not yet certified, so the test results can be provided is for reference only.

The head of the Crimea Sergey Aksenov has expressed confidence in the skills of laboratory specialists. “I think this assessment is really true, he added. – However, the official confirmation will receive in the Krasnodar region”.

Aksenov instructed to determine the complex of measures on protection of consumer rights and awareness of Crimean residents about these inspections of fuel quality at gas stations.