GORKI, February 15. Russia blocked the movement on its territory of all Ukrainian automobile trucks, except those moving to Kazakhstan under guard. This was stated by Deputy Prime Minister Arkady Dvorkovich at the meeting, Prime Minister Dmitry Medvedev with his deputies.

“At the moment, the Ukrainian movement of vehicles on the territory of Russia is stopped, except – for now – vehicles that travel in Kazakhstan in accordance with the decision taken under escort. These vehicles have not been stopped yet,” said Deputy Prime Minister.

Dvorkovich noted that until yesterday, the Russian side did not take any measures against Ukrainian air carriers. As the situation has not improved, on the Sunday following the consultations between the foreign ministries, the Ministry of transport and approval of proposals by Deputy Prime Minister Arkady Dvorkovich, the decision was made to stop traffic on the territory of Russia the Ukrainian trucks. 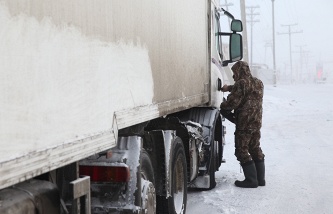 According to Dvorkovich, on Monday after receiving additional information from the Russians about stopping the first trucks in the Russian territory, the Ukrainian side took the official decision to suspend the traffic of Russian carriers. “I mean, they actually legalized the actions that were previously committed,” said Deputy Prime Minister.

He noted that the Russian authorities continue to work on the way out of the situation. “The foreign Ministry, the transport Ministry and our Ambassador in Ukraine continue operation on unblocking of the situation in Ukraine,” – said Dvorkovich.

Earlier in the day, the press service of the Cabinet of Ministers of Ukraine reported that the government had taken the decision to suspend the movement of Russian heavy vehicles throughout the country.

Ukraine to temporarily suspend transit of cargo vehicles registered in Russia, on the territory of Ukraine. A relevant Protocol decision was adopted at the government meeting on Monday morning, 15 February

the press service of the Ukrainian government

To date, more than 500 Russian trucks could not return to Russia from the EU due to the Ukrainian blockade, about 100 trucks are stopped in Ukraine.