NEW YORK, February 14. /Corr. Alexey Kachalin/. NATO is currently focused on how to contain Russia not only politically, but also militarily. 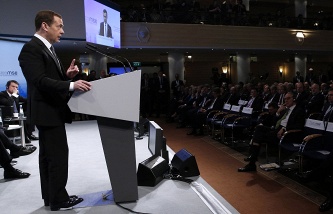 As stated in a published interview with American newspaper the Wall Street Journal the permanent representative of Russia to NATO Alexander Grushko, “blending military planning and policy is a dangerous trend.”

“Now, as we can see, the focus (NATO) on how to contain Russia. Not only politically, but also militarily. This mixing of military planning and politics is a dangerous trend”, – quotes the edition of words of a diplomat.

“It is not our choice. We firmly believe that we must continue to go towards the creation of a new Europe”, – said Grushko.

He agrees with the assessment of Prime Minister Dmitry Medvedev, speaking at the Munich security conference, said that Russia and the Western countries slid towards a new cold war. “We’re seeing this now. NATO is moving in the direction of ensuring security in accordance with the old scheme, instead of seek ways to increase interaction with Russia on a range of issues affecting security,” said the Russian permanent representative. As an example of such collaboration he called Afghanistan, combating terrorism and resolving the unstable situation in many parts of the world.

At the Munich security conference, Medvedev said that “remains unfriendly and closed political line of NATO against Russia”. “You could say sharper: we slid essentially into the times of a new cold war”, – said the Prime Minister.

“Almost daily we announce the most terrible threat for NATO as a whole, separately for Europe, for America, for other countries,” he said. “Although the real threats that exist in our little world, and I hope-you understand – lies elsewhere”, – said Medvedev.

The reference in the report by the NATO Secretary General Jens Stoltenberg, Russian military exercises with the alleged testing of a nuclear attack against countries of the Alliance and the Sweden “not true,” said Grushko. 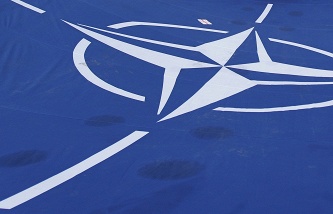 “All these stories about so-called simulations of nuclear attacks on other States do not correspond to reality,” the Russian diplomat said, calling the speculation of allegations of testing of use of nuclear weapons in Sweden, “a non-nuclear state”.

He assured that Russia does not openly and transparently conducts exercises designed to maintain the combat readiness of Strategic nuclear forces. “I again would like to say that they are absolutely transparent and no secret they are not. The purpose of these exercises is to test the combat readiness of our nuclear forces. Our strategy is clear. It lies in the fact that nuclear weapons can be used only when there is a threat to the very existence of the state”, – said Grushko.

In anticipation of the previously held meeting of defense Ministers of NATO countries, he clarified some questions from Russian reporters in Brussels. So, he considered the attempts of the Alliance to sharpen nuclear issues artificial. “It is well known that along with the restrictions of the Treaty Russia by three-quarters has reduced its Arsenal of nonstrategic nuclear weapons and its concentrated at Central storage facilities within national territory. The presence of nuclear components in the us military exercises is on maintaining the combat readiness of our Strategic nuclear forces, guarantor of Russian national security and strategic stability in the world”, – said the permanent representative of the Russian Federation.

He also stressed that the Alliance from the Russian side “there are well-grounded claims in connection with the practice of so-called “joint nuclear missions” of NATO (nuclear sharing), which, itself, is contrary to the spirit and letter of the NPT”.

The timing of the resumption of work of Council Russia-the NATO should be addressed not to the Russian Federation, and the Alliance leadership. It imposes on Moscow’s confrontational agenda,” said Grushko. 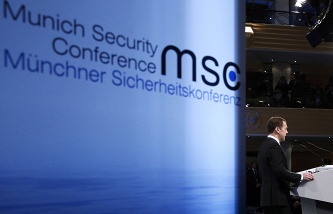 Of sleepwalking NATO and a new cold war: best quotes of Munich-2016

“It was NATO’s decision to cease all cooperation with Russia. I ask, what kind of benefits can such a meeting? The NRC was established in order to identify common challenges in the field of security. We found it possible to respond jointly to these challenges. In Afghanistan (and in) counter terrorism, we were able to find ways to interact”, – noted the diplomat.

He confirmed that Russia remains open to any proposals to establish cooperation on substance, of course, observing the principle of unity of objectives pursued. “From this point of view, we are open to any initiatives aimed at establishing a meaningful cooperation, if we are guided by shared tasks. We have many common goals, because we are equally vulnerable to the common threats in the security sphere,” – said Grushko.

The obstacle of the envoy named NATO’s desire to contain Russia. “This military expansion near our borders is essential and significant factor to be considered in our defence planning. We will do so to protect our legitimate (legitimate) national interests,” warned the diplomat.

According to him, NATO “is trying to impose on us confrontational agenda, which, we believe, is in the past”. “Our vision of European security allows all countries to be involved in joint approaches to new challenges in the security sphere”, – said the permanent representative of the Russian Federation.

Meetings of the Council NATO-Russia was suspended after April 1, 2014, the Alliance ceased military cooperation with Russia in connection with the differences caused by the crisis in Ukraine. 2 December 2015 NATO Secretary General Jens Stoltenberg announced that the organization decided to resume the work of the Council. On 13 February at the Munich security conference, Stoltenberg said that he discussed with Russian foreign Minister Sergey Lavrov the possibility of renewal of work of Council Russia – the NATO.