MOSCOW, February 14. The Ministry of transport has suspended the movement on the territory of Russia of cargo vehicles, registered in Ukraine in response to Kiev’s actions. This is stated in a message posted on the Ministry’s website.

“On the territory of Russia in response, suspended the movement of freight vehicles registered in Ukraine”, – stated in the message. 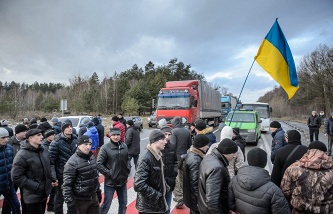 Ukraine has blocked more than a hundred Russian trucks

The effect of these measures will be maintained until the settlement of the Ukrainian side the situation with the unlawful blocking of the Russian freight motor transport means on the territory of Ukraine.

The Agency notes that during 11-12 February 2016 be easily enter or leave the territory of the Russian Federation of the Ukrainian 1038 commercial vehicles.

“Until now, the Ukrainian side has not accepted measures on suppression of illegal actions of these groups to ensure smooth movement of Russian cargo vehicles. Relevant inquiries of the Russian side remained without answer”, – stated in the message of Ministry of transport.

The situation on the roads of Ukraine

According to the Ministry, currently in different regions of Ukraine remain blocked over 100 trucks and more than 500 can not enter the territory of Ukraine from the European Union States, returning to Russia.

Media: journey of the Russian trucks began to block in the Zhytomyr region

Earlier in the day, Ukrainian media also reported that more than 100 Russian trucks are still blocked in various fields. Road to the fur covered almost the entire Western border of Ukraine. Total, according to the TV channel “112”, participate in the blockade nine regions: Volyn, Rivne, Lviv, Zakarpattia, Ivano-Frankivsk, Zhytomyr, Vinnytsia, Sumy and Chernivtsi. Citizens are on duty on roads leading to Slovakia, and on highways linking Ukraine with Belarus. Participants require an official ban on the movement of Russian trucks through territory of Ukraine.