KURGAN, on February 15. The Chairman of the Federation Council Valentina Matviyenko urged the owners of “Kurganmashzavod”, the only Russian manufacturer of infantry fighting vehicles (IFV), a more responsible approach to their duties. This Matvienko said at a meeting with Governor of Kurgan region Alexei Kokorin, commenting on the situation at the plant, which is under threat of bankruptcy. 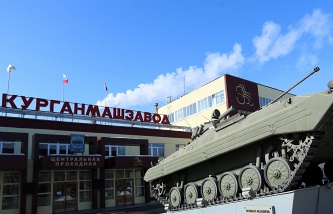 “The company is loaded the state defense order. There is a backlog of orders, there is underneath that to create, to develop, to modernize production, so the owners need a more responsible approach to his duties”, – quotes the press service of the regional government words Matvienko.

In turn, Kokorin noted that the issue in the salaries of “Kurganmashzavod” has already been resolved.

“No debts. Still had debts on electric power and tax payments. I recently met with one of the founders of the company. He assured that in the near future the situation will be levelled. The production is the largest enterprise in the Kurgan region, there are about 5.5 thousand people. It is the backbone enterprise, and its stable operation is very important for us”, – said Kokorin in an interview with Matvienko.

The case of the bankruptcy of “Kurganmashzavod”

Earlier Kurgan arbitration court has left without movement the claim about bankruptcy of “Kurganmashzavod”. The decision is due to the errors in the statement, according to information from the records of the court. “The statement of LLC “Group with me” about a recognition insolvent (bankrupt) of JSC “Kurgan machine-building plant” to leave without movement. To invite the applicant to eliminate the violations and to ensure that documents in the office of the court of arbitration for a term until 14 March,” – noted in the court.

The applicant is LLC “Group test”, registered in Moscow. As previously reported in the press service of the court application linked to overdue payments under lease agreements LLC “Group with me” and “Kurganmashzavod”. Previously, these companies were approved a settlement agreement according to which the plant needs in two stages to pay more than 40 million rubles of total debt for lease payments and about 1,9 million roubles of the penalty. However, as explained in court, the company paid only 276 thousand rubles of the total debt. In connection with atiim “Group with me” demands to recognize the plant bankrupt and appoint a Trustee, said the press service of the court. The application was filed on 5 February.

As previously reported, the company also had outstanding salaries to employees, as well as the debt for gas to “Gazprom Mezhregiongaz the barrow”.

“Kurganmashzavod” (enters into concern “tractor plants”), the country’s only enterprise producing infantry fighting vehicles, standing on the armament of the armies of nearly three dozen countries. This BMP-2, BMP-3, machines based on them, modernized BMP-1, BMP-2 and BMP-3, armoured recovery vehicle BREM-L, and unified chassis based on the BMP-3 to create on its basis a variety of weapons systems.

In 2015 “Kurganmashzavod” concluded with the Ministry of defense of the Russian Federation long-term contract for delivery in 2015-2017 troop units of the Russian army over 200 BMP-3.