MOSCOW, February 15. Prime Minister of Russia Dmitry Medvedev considers that if Turkey was hit by Soviet aircraft in the USSR, it would have received, at least, a serious retaliation. The current actions of Russia, in his view, confirm the peaceful policy of Moscow. 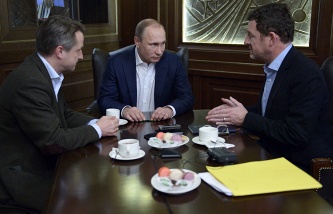 “Let me be clear: if something like this (the incident with the Russian su-24 aircraft shot down by Turkey) has occurred, for example, in Soviet times, most likely, would have started a serious conflict. If, God forbid, not a serious war, it just would have been a retaliatory strike and so on,” said Putin in an interview with Time magazine.

In his opinion, taken in Moscow of the decision show that “Russia in this sense absolutely peaceful.” “And even though it was an obvious provocation, when the (Russian) plane was shot down in the space of Syria, Russia did not respond militarily,” stated Medvedev. He reminded that Russia “was forced to respond by curtailing political and economic cooperation (with Turkey)”.

The Prime Minister believes that the attack on the Russian su-24 Turkey “was not framed, she was framed, the whole of the North Atlantic Alliance”. “It’s very irresponsible,” said Medvedev.

“In this regard, much depends on the will of the leaders of the Alliance to influence the most anxious members of NATO, which provoke the conflict with other countries,” – says Medvedev. “This is eventually the issue of discipline in the Alliance. We understand than such ends,” said the Russian Prime Minister.

November 24, 2015 Turkey has shot down a Russian su-24 bomber, which took part in anti-terrorist operations in the skies over Syria near the border with Turkey. The commander of the crew died. Turkey did not apologize to Russia.