MOSCOW, February 15. Recent advances of the Iraqi army in the fight against the terrorist group “Islamic state” (IG, is prohibited in Russia) directly connected with the supply of arms and military equipment from Russia. This opinion was expressed by Deputy Prime Minister Dmitry Rogozin in an interview to the newspaper “Kommersant”.

“This concerns, first of all, attack aircraft and equipment of the army. Thanks to this “Islamic state” was dropped from the positions that it occupied not one month” – said Rogozin.

Last week the Deputy Chairman of the Russian government at the head of an impressive delegation of about a hundred representatives of authorities and business went with a two-day visit to Baghdad, where he held for eight years the meeting of the Russian-Iraqi intergovernmental Commission.

Rogozin: cooperation between Russia and Iraq on military-technical cooperation will help the release of terrorists

Rogozin: Russia is ready to supply to Iraq of quality industrial products

Rogozin made disparaging remarks about the end of U.S. military presence in Iraq

The Vice Prime Minister in an interview stressed that the Russian President Vladimir Putin “gave Iraq a helping hand in the most difficult moment, having to make delivery and transfer of equipment at a great pace”. Rogozin also noted that after the success of the Iraqi military immediately there is a problem with the Turkish contingent, illegally entered the territory of Iraq.

“In all negotiations with representatives of the Kurdish, Sunni, Shiite communities – we are given to understand that Iraq considers the presence of Turkish troops in the amount of not less than 1,5 thousand people on the North invasion, aggression, – said Rogozin. – In fact Turkey tries to use the temporary weakness postoccupational Iraq, trying to expand their zone of influence by military ways”.

The Deputy Chairman of the Russian government noted that the Iraqi authorities thanked the representatives of the Russian Federation provided for all lines of support, including Russia’s position in the UN security Council on this issue.

However, Rogozin stressed that the air force operation forces of the Russian Federation in Iraq is not provided – at the recent negotiations on this question.

“They just want to them no one bothered to fight: we help them, help weapons. They are categorically against the appearance of any troops, whether the Turks in the North or someone else,” – said Deputy Prime Minister.

Iraq fears an influx of militants from Syrian territory

Rogozin also said that Moscow is waiting for the return visit of the delegation from Baghdad as soon as the Russian parliamentary delegation will visit Iraq.

“Without a doubt, in Moscow our colleagues will arrive. But before that in Baghdad will have to fly the parliamentary delegation, they would very much like to meet Russian deputies,” Rogozin said, commenting on the visit of the Russian delegation to Iraq. 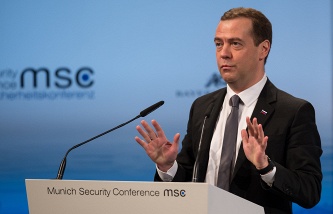 Medvedev: if not normalize the situation in Syria, terrorism is the new war

“Iraq is very worried that due to successful actions of the Russian aviation in the sky and the Syrian government troops on the ground fighters will be squeezed to the territory of their country. In this regard, Iraq is making a big bet on the strengthening of the role of the coordination centre in Baghdad,” he said.

According to Rogozin, the talks they also talked about the split line on Iran and Saudi Arabia. “Iraq has offered to resolve the conflict, but, as they believe that this initiative did not find understanding in any of the sides,” he said.