MOSCOW, February 15. Moscow considers the shelling of Turkey by Syria blatant support of international terrorism and the violation of the relevant resolutions of the UN Security Council. This is stated in the statement of the Russian foreign Ministry. 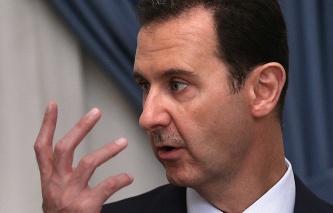 “Starting from 13 February, concentrated in the border areas, the Turkish artillery has made massive attacks on Syrian towns recently liberated from the terrorists, government forces and Kurdish militias, – said in a statement. The attacks, in particular, has been an airfield Minneh, towns and villages Maraman, ain DCMA, Marinas, Inaba, Deir Jimal in the province of Aleppo as well as the positions of the Syrian army in Latakia province”.

“At the same time, according to the information received, the Turkish side continues to contribute to illegal penetration into the territory of Syria fresh groups of jihadists and mercenaries with arms in addition to shabby in battle groups “dzhebhat EN-nusra”, “Islamic state” (a terrorist organization banned in Russia – approx.) and other terrorist organizations, – stated in the Ministry. – In Turkey across the border the militants transported the wounded are moved and scattered the gang for relaxation and subsequent reformation”.

Syrian foreign Ministry reminded that in the Russian depodesta, has written to the UN Secretary General and the President of the UN security Council of a letter “demanding to put an end to incessant armed provocations of Ankara, to force Turkey and other countries – sponsors of terrorism to accomplish anti-terrorism resolutions and to cease immediately the material and financial support to terrorists.” “The Syrian government reserves the right to respond to aggressive attacks in Turkey,” said the Ministry.

In Moscow “expressed very serious concern about the aggressive actions of the Turkish authorities against the neighboring States”.

“We see this blatant support of international terrorism and the violation of the relevant resolutions of the UN Security Council and the commitments made by Turkey as the country-participant of the International support group of Syria in Vienna, new York and Munich, – the statement stresses. – Russia will support to raise this issue in the UN security Council so the Security Council gave a clear assessment of the provocative lines of Ankara, posing a threat to peace and security in the Middle East region and beyond”.