MOSCOW, February 15. The chairmanship of Russia in BRICS this year has shown that Russia has “raised their rates” in international Affairs. This was stated by Deputy Minister of foreign Affairs of the Russian Federation Sergey Ryabkov on the TV channel “Russia 24”.

“Russia, undoubtedly increased their shares, stakes in international Affairs, the diplomat noted. Even more conclusively that empty nonsense that Russia is in some kind of isolation, destroyed.”

“I think this is a good result of the summit in Ufa” – he said.

According to Ryabkov, the BRICS since its inception has become one of the pillars of a multipolar world.

“The BRICS 10 years after the first Ministerial meeting is absolutely not recognizable Association, is one of the pillars of a multipolar world, – said Ryabkov. Is not only meetings and conferences, BRICS is a practical work”.

“Always wanted to move from declaratory character of the practical work. And so it happened”, – noted he.

The Deputy Minister noted that this was particularly apparent during the Russian chairmanship in the Association.

On settlements in national currencies between BRICS countries

Ryabkov noted that the calculations in national currencies between BRICS countries will protect the economy from arbitrary methods of the US and the EU.

“Certainly (there will be capacity payments in the national currency – note). We see great advantages in the organization of such schemes to the BRICS States, their business entities and economic operators protect themselves against arbitrary practices in the sphere of economy of the USA, EU and others,” he said.

“But the BRICS is not a military barracks, a format where someone someone under duress forces you to join these projects, said a senior diplomat. – The logic of development will lead the other participants to the need to diversify forms of payment. All BRICS members agree on the necessity and appropriateness of this”.

About a series of new projects in the sphere of economy

Ryabkov said that in the framework of BRICS is developing a series of new projects of economic partnership.

“Two well-known examples (cooperation Association) – creation of the BRICS infrastructure Bank, which would help all our countries displayed on the most modern level of infrastructure in different areas, the second is a Pool of foreign exchange reserves, which allows you to borrow from BRICS partners in the macroeconomic interests,” he said.

“Besides, we have already a series of joint projects in the BRICS, developed in accordance with the strategy for economic partnership, approved in Ufa. We have a huge array of formats for negotiations in the field of security and space, and counter-terrorism efforts, security in the transport sector, the security of our transport from piracy and so on,” added Ryabkov.

On the establishment of energy Union

In the BRICS comes the realization that we can not allow the monopoly of Western organizations in the energy sector, said Sergei Ryabkov.

Answering the question about the possibility of creating an energy Union within the framework of BRICS, he noted that “awareness of the need for this gradually”, but “in practice” takes time.

“As for energobaltia BRICS, perhaps, justified by the parallel with the situation of calculation in national currencies – it should ripen. We can’t artificially boost a process, but understanding that in this field (energy – ed.) also we cannot accept the monopoly of the West and the structures that serve the interests of the West, I think this understanding is gradually formed in the circle of BRICS,” said a senior diplomat.

About realization of joint projects of the BRICS countries

Ryabkov said that Russia expects that the New development Bank (NDB, the BRICS Bank) may soon take a decision on the allocation of funds for the implementation of joint projects of the participating countries. 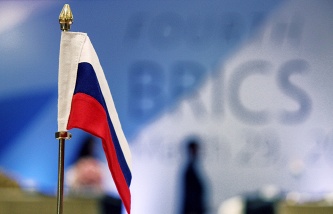 Sergey Ryabkov: Moscow was pleased, as was the “year of Russia” in the BRICS

“The financial-economic bloc (BRICS – approx. ed.) received a significant increase. Now we are working out a roadmap for trade and economic cooperation, Russia has made more than 30 proposals. I hope that the New development Bank of BRICS in the near future will make decisions on the allocation of funds for such projects, including in Russia,” he said.

The new development Bank is an international financial institution that will be controlled by member countries of BRICS. The agreement establishing the Bank signed on 15 July 2014 in the Brazilian city of Fortaleza.

Its main task is the financing of infrastructure projects and sustainable development projects in BRICS and other developing countries. The initial capital of NDB will be $10 bn, headquartered in Shanghai. Earlier it was reported that the first credit resources NBI will provide in April 2016.

February 15 the presidency of Russia in the BRICS moves to India.