MOSCOW, February 15. Press Secretary of the President of Russia Dmitry Peskov called absolutely outrageous outrage towards Russian carriers, with the connivance of the Ukrainian authorities. According to him, the ban on the transit violates international law.

To the question, do you know about the Kremlin announced Monday the official decision of the Ukrainian authorities to ban the transit of Russian trucks through territory of the country, Peskov replied in the negative. “No, I don’t know about it, and don’t know what it stands for,” said he. 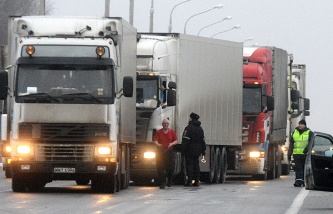 “Of course, it is absolutely outrageous, when with the connivance of the authorities in Ukraine such chaos going on in relation to our carriers,” said Sands.

According to him, the Ministry keeps the situation under attention. “Of course, this is a matter of extreme importance. Do you know about forced countermeasures, which announced the Ministry of transport. We are very closely monitoring this situation and we believe that the Ministry of transport of energetic measures are being taken to change this situation. This time, – said the representative of the Kremlin. And second, of course, to ensure adequate response in the event of an unwanted continuation of this crisis”.

Earlier in the day, the press service of the Cabinet of Ministers of Ukraine reported that the government had taken the decision to suspend the movement of Russian heavy vehicles throughout the country. “Ukraine will temporarily suspend transit of cargo vehicles registered in Russia, on the territory of Ukraine. A relevant Protocol decision was adopted at the government meeting on the morning of Monday, February 15”, – stated in the message.

Russia February 14, suspended the Ukrainian movement of trucks across the country in response to blocking access to the border with Belarus to the Russian trucks, said the Ministry of transport of the Russian Federation.

As of 9:00 Moscow time on the territory of the Russian Federation were detained 152 truck belonging to Ukrainian carriers, said the Federal Agency for transport supervision.