MOSCOW, February 15. The Kremlin welcomes today’s meeting between Patriarch Kirill and Pope, and support their intention to continue the dialogue, said press Secretary of the President Dmitry Peskov. 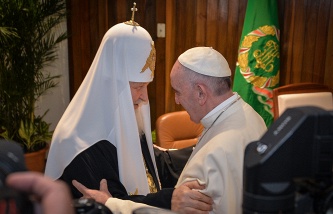 The meeting, which waited for centuries

He added that this position is especially important in those countries “where necessary to protect not only the interests but the lives of Christians.”

Peskov said it is “important to note the desire of the Patriarch and the Pontiff, which they expressed in terms of a continuing dialogue”.

The primates of the Roman Catholic and Russian Orthodox churches met at the international airport Jose Marti in Havana on 12 February. It was the first meeting in history, which became an important step towards the rapprochement of the Catholics and the Orthodox.