MOSCOW, February 15. The national anti-terrorist Committee (NAC) is celebrating ten years since its inception. It was formed to create a single system of combating terrorism, which brings together the efforts of all law enforcement and other state bodies. NAC is coordinating the interagency structure. The decision on its creation was accepted after the events in Beslan in North Ossetia, 1 September 2004, militants seized the school. As a result of the attack, which became the most terrible in the history of Russia, killing 335 people, including 186 children.

From the struggle to the opposition

Established in 2006, a counter-terrorism system was the answer to large-scale terrorist acts of the late XX – early XXI century. In the composition of the NAC was formed by the Federal operational headquarters, headed by the FSB Director. In the regions anti-terrorist Commission, which are headed by heads of subjects of the Russian Federation, and the regional operational headquarters under the leadership of heads of territorial bodies of the security.

Gradually in the NAC went from the term “war on terror” because it is only one third of all tasks, and moved to the term “combating terrorism”. Now in Russia at the appropriate level are successfully addressed three challenges: prevention of terrorist attacks, their prevention and elimination of their consequences.

All decisions of the NAC are required for all structures of authority that gives the most to consolidate efforts in combating terrorism.

An important element in countering terrorism in the NAC has repeatedly described the decrease in the level of terrorist activity and a return to peaceful life of persons who are under the influence of terrorist ideology. The first solution to this problem in larger plan began immediately after the establishment of the NAC in 2006, when the rebels offered to lay down weapons and for those who voluntarily “come out of the woods”, announced Amnesty. Only for July 2006 – January 2007, according to NAC, the voluntary surrender bowed 546 militants, but only until the end of the “Amnesty” – more than 750 members of illegal armed groups.

But this practice was further developed. In the “hot regions”, such as in Russia more than ten commissions were established adaptation to civilian life, and over the past five years to renounce their complicity with militants has sentenced about 300 people. They voluntarily came to the police, lay down their arms, and after serving his sentence for the acts committed adapt to civilian life. In doing so, they help the Commission for adaptation.

The bulwark against foreign terrorists

Russia was one of the first in the world to form a system of countermeasures that allow to adequately respond to the rising danger from foreign terrorists. By estimations of special services, this category is most active in hot spots outside the Russian Federation. The situation is fraught with the fact that they are, which is his combat experience, training, skills, sooner or later return to Russia, and they pose a threat to the Russians. The criminal code of the Russian Federation for the first time in the world was introduced the responsibility for recruiting, promoting terrorist ideology, training and the training of terrorists, participation in combat activities on the territory of other States in illegal armed formations (IAF), established in defiance of the law of a country, as well as for participation in illegal armed groups in Russia. All these crimes were criminalized.

In addition, as noted previously in NAC, Russian security services have a fairly objective and holistic view about how individual citizens of the Russian Federation are in the ranks is prohibited in the Russian Federation the terrorist group “Islamic state” (IG) and other international terrorist organizations, and the forms of their use in the Commission of terrorist crimes, which allows you to build an adequate system of opposition.

In 2015, as announced in December last year at the NAC meeting, FSB Director Alexander Bortnikov, “the situation in the field of combating terrorism in the country keeps the tendency to normalization, but remains difficult due to the ongoing activities of bandit groups in the North Caucasus, the spread of the ideology of terrorism in social networks, the increased activities of international terrorist organizations, especially after the start of decisive actions of the Russian aerospace defence forces against ISIL (former name of the IG – ed.) in Syria.” 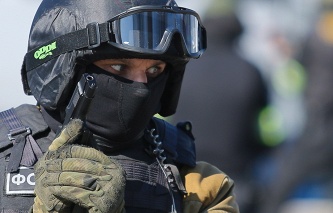 However, in Russia of terrorist activity decreases. “As a result of coordinated actions of the Federal bodies of state power last year managed 2.5 times to reduce terrorist activity in the country in General and in the North Caucasus region. Law enforcement authorities prevented 30 terrorism-related crimes, arrested more than 770 bandits and their accomplices, of the illicit seizure of a significant quantity of weapons and ammunition,” – said Bortnikov.

During counter-terrorist operations eliminated 156 militants, including 36 leaders. Of the 26 leaders of bandit groups who have sworn IG, neutralized 20. This has effectively paralysed the work of the organizational link of the thugs and stopped the process of restoring his strength.

One of the main directions in activity of the NAC, said Bortnikov, work remains on prevention of terrorism. Increased the quality of work of the antiterrorist commissions in subjects of the Russian Federation, become more efficient their work in municipalities. And thanks to active measures to protect the Russian Internet from terrorist and extremist propaganda in the first half of 2015 have been blocked over 3 thousand information resources.

The security forces managed to prevent the departure to Syria and Iraq more than 100 citizens of the Russian Federation.