TASS KIT. 40 years ago, February 16, 1976, from the conveyor of the Kama automobile plant (now PJSC “KAMAZ”) rolled off the first truck.

In the late 1960s in the USSR was used to develop a new class of trucks weighing over 8 tons with economical diesel engine. Minsk automobile plant at that time began the production of trucks MAZ-500, but their capacity was limited to 7.5 t 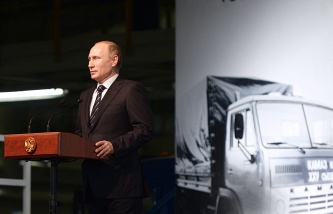 Putin: the state supports and will continue to support KAMAZ in the future

In 1969 the Moscow Plant them. Likhachev graduated from the design of the trucks ZIL-170, prototype of which was the American manufacturer International COF-220. The capacity of the ZIL and the manufacturer of the engines of the Yaroslavl motor plant, was not enough to master production of the new model. Therefore, it was decided to build a new plant.

August 14, 1969, was signed the decree of the CPSU Central Committee and USSR Council of Ministers “On the construction of complex automotive plants in Naberezhnye Chelny Tatar ASSR”. The location was chosen taking into account the developed infrastructure: in 1963, the city began construction of the new Nizhnekamsk hydroelectric station.

The construction of the enterprise of a full cycle, called “Kama automobile plant” (KAMAZ) began on 13 December 1969 In the early 1970s, it was announced shock Komsomol building. Much of the equipment for the plant was supplied from abroad. So, equipment for the production of transmissions was purchased from the West German Corporation Liebherr, the plant producing engines was built by the French Renault.

The first production truck based on a prototype ZIL-170, get the index KAMAZ-5320, rolled out of the factory on 16 February 1976 At the present time this copy is in the Museum. The act of commissioning of the first plant was signed on December 29, 1976

By the end of 1977, KAMAZ produced 22 thousand trucks. In October 1988 the company produced its millionth car on the account, and also began production of small passenger cars – a VAZ-1111 “Oka” (project sold to Severstal in 2006).

April 14, 1993, a fire completely destroyed the plant of KAMAZ engines, to restore the production managed to the end of the same year. The damage amounted to about $150 million.

Since the mid-1990s, KAMAZ is actively cooperating with foreign partners for the modernization of production: among them the British Daimler Trucks, Cummins American, Italian CNH Global, etc. Anniversary 2 millionth truck rolled off the Assembly line February 16, 2012

The composition of PJSC “KAMAZ” consists of 13 units, for a total of 110 enterprises in Russia and CIS countries.

The number of staff in the group of companies PJSC “KAMAZ” – 36 thousand people.

On the subsidiary in Neftekamsk produced a line of buses and electric buses NefAZ.

Position in the industry and indicators

KamAZ is the largest manufacturer of heavy trucks in Russia and former USSR countries. The company occupies the 14th place in the world on release of cars of this class. It accounts for about 33% of the Russian market.

The state Corporation “rostekh” owns 49.9 percent of KAMAZ shares, of 23.54% owned by the Cypriot company Avtoinvest Limited (“Avtoinvest limited”, the owners – Sberbank of Russia “Troika dialog”, etc.), another 15% of the shares is the German company Daimler. The rest of the company’s shares are in free float on the Moscow exchange.

In 1988, when KAMAZ was founded its own team for participation in competitions on rally “KAMAZ-master”. Currently the team, playing on a specially retrofitted trucks, is a three-time winner of the world Cup off-road rally. 13 time the “KAMAZ – master” won the rally-RAID “Dakar”, 4 times in a marathon “the silk way”.