SEVASTOPOL, on February 16. /Corr. Janina Vaskovsky/. The Governor of Sevastopol Sergey Menyailo voted against direct elections of governors. He declared it in interview to Vladimir Pozner on channel one. 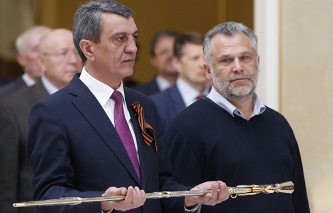 Roan insists on elections of the Governor of Sevastopol in 2016

“I am for strong vertical of power. Elections and democracy are two different things. Election is technology. We see how they go. So I am in favour of the governors, appointed, – said Menyailo. – In democracy, as in war, to not play. I’m against censorship and for freedom, but within the framework of common sense”.

Earlier, the Chairman of the legislative Assembly of Sevastopol Alexey Chaly called for the holding of national elections of the Governor this year. Necessary changes to the city Charter will be made at the nearest session of legislative Assembly. In addition, the Sevastopol Parliament on 1 February acknowledged the work of the government of Sevastopol unsatisfactory and recommended that the Governor send him into retirement.

Menyailo believes that “only the part of the deputies supported this view” and “the other approximately equal to the part of deputies,” against such assessment. (For the resignation of the government voted 13 out of the 24 deputies of the legislative Assembly, 11 in protest left the hall).

“If I tell you that all is well in the city, it will be wrong. I work on earth and do everything to give the result. Evaluation of the activities of the government of Sevastopol gives the government of the country. I’m self-critical attitude to their activities. I see what is done and understand why,” said meniailo.