KHABAROVSK, on February 16. /Corr. Sergey Mingazov/. The agreement between the potential anchor resident TOR “Khabarovsk” at “the Airport”, which is implementing the project of upgrading the airport worth over 17 billion rubles, and the Corporation of development of the Far East will be signed before the end of February. This was announced by the Governor of Khabarovsk territory Vyacheslav Shport. 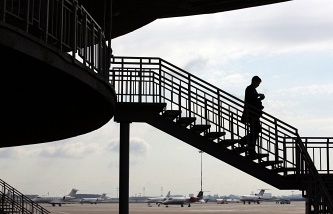 “Investors of the project agreement on the allocation of land which land was transferred to the development Corporation Far East signed, I think for one or two weeks it will be signed and the Corporation. Further – the resident status of the TOR, these papers are very important in dealing with a pool of investor, among them Korean, and Japanese companies, and the owners of the Khabarovsk airport”, – the Governor said at the workshop that he held at the airport “Is a project with investment at 17-18 billion rubles, no one to abandon it”, – said Shport.

To address issues related to the modernization project of the airport, at the meeting, according to the head of the region had decided to establish a permanent working group.

It requires an investment of RUB

LLC “international airport of Khabarovsk”, created as an anchor resident of the area “Airport” THOR “Khabarovsk”, was represented at the meeting Vice President for strategy and development of the UK “Komax” Tatiana Semenova.

“All of our projects will be implemented. Once we sign an agreement with the Corporation, exploratory and estimate documentation for the construction of the passenger terminal will be sent to the state expertise,” said Semenov at the meeting. She also added that negotiations on project financing are underway with the Russian state-owned banks, with Japanese investors and Fund development of the Far East.

Responding to a question Corr., the resident representative explained that the investment in the project must be “correspondent.” “To borrow in the currency now,” she said.

Previously the Manager of the Khabarovsk branch of VTB Bank noted that investment complexity of the modernization project of the airport related to the fact that in Russia there is no insurance of currency risks for a period of more than a year, and it is holding investments that are “long money”.

Last Friday, 12 February, representatives of the potential resident of the area “Airport” was absent from the meeting on the implementation of the TOR project in the Khabarovsk region, which was held by the presidential envoy in the far Eastern Federal district Yuri Trutnev. Then the Plenipotentiary has charged to the Corporation for the development of the Far East in two weeks to find out the reasons that have still not begun work on the modernization of the Khabarovsk airport (the project is announced for delivery at the site of the “Airport” in the top “Khabarovsk”).

“If there are objective reasons that hinder the development project, the reasons should be eliminated. Otherwise, this investor we for noncompliance will select all”, – said Trutnev.

In the summer of 2015 was created the company “the international airport of Khabarovsk” as a potential resident TOR “Khabarovsk”, which will upgrade the airport facilities. It was assumed that in capital of a resident of TOR will include all the main beneficiaries of JSC “Khabarovsk airport” and the development Fund of the Far East.

Previously, the owners of the airport reported that the plan involves the construction of a new passenger terminal, three stars hotel, exhibition complex, a shopping and entertainment complex, new cargo terminal, transport and logistics complex.

The entire project implementation period up to 2021 was estimated at about 20 billion roubles, a new passenger terminal 6.5 billion with construction period from 2016 to 2018. In addition, under the Federal program development of transport system of Russia until 2020 has started reconstruction of airdrome of the airport. For these purposes, provided more than 8 billion rubles.

International airport “New” in Khabarovsk – the largest airport in the far Eastern Federal district, which occupies the first place in the region in terms of passenger traffic. In Khabarovsk airport make flights of about 60 companies on scheduled and Charter basis, serving domestic and international destinations.