“Negotiations on the issue of decline in oil production from OPEC Russia are underway, but the topic is discussed with individual member countries of the cartel mainly through Venezuela,” — said on Monday Russia’s permanent representative at OPEC, Vladimir Voronkov (quoted by “Interfax”). Later in the evening Agency Bloomberg referring to an anonymous source reported that energy Minister Alexander Novak may meet to discuss the situation in the oil market, Minister of petroleum and mineral resources Saudi Arabia Ali al-Naimi in Doha (Qatar) on Tuesday.

The next day after the meeting, Novak said that Russia is ready to discuss with Saudi Arabia and OPEC is proportional to the reduction in oil production by about 5% to restore balance in the market. He talked about a possible extraordinary meeting of OPEC in February, while the Russian participants will receive an invitation. But a variant in which 5% is reduced only export, Novak did not disclose.

The scenario with the reduction of exports, according to the Manager of one of the oil companies may become more gentle for the market: it does not affect demand for raw materials for the domestic market and will not hit the small companies, not oil-exporting. In this case, the main share of reduction of production will fall on the largest exporters, primarily Rosneft. A source familiar with the discussion at the meeting with the Novak notes that the decline in production of exporters is not so critical: production at major production “daughters” “Rosneft” “Yuganskneftegaz” and so falls. In 2015 the oil production of Yuganskneftegaz, according to CDU TEK, fell by 3.3%, to 62.4 million tonnes. 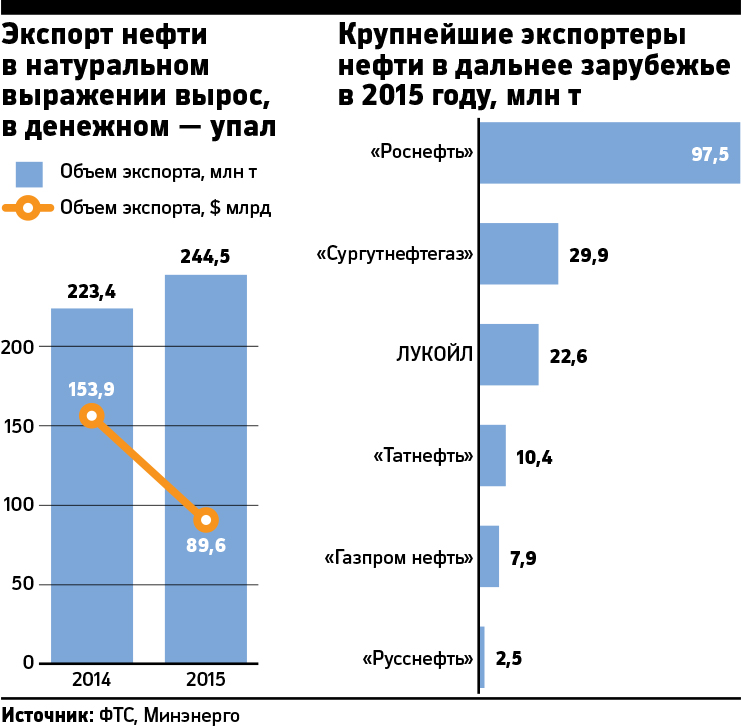 According to the estimates of senior analyst at UBS Maxim Moshkov, a decrease of 5% of oil production in Russia would deprive the outer market of 550 thousand barrels. a day. The current world production surplus is now, according to the International energy Agency (IEA), is a 1.75 million barrels. a day, so such a solution would reduce the surplus by a third. Under these conditions, world oil price could grow to $40 a barrel Brent (from the beginning of the year, Brent crude oil, the average cost is $30, Saturday — $33,79), says Moshkov.

For the second scenario — reducing exports to 5% of oil supplies to the world market will be reduced by 244 thousand barrels. a day, it will reduce the global oversupply is less than 15%. But such a reduction could gain a foothold above $35 per barrel (even without taking into account the reduction in OPEC production).

In the case of simultaneous decline in production by Russia and OPEC 5% of the global supply of oil will be reduced by 2.15 million barrels. in a day — even higher than is the current production surplus, predicts analyst Raiffeisenbank Andrey Polischuk. Then the oil price could rise to $70 per barrel, he said. If we reduce 5% of Russia’s exports and OPEC, the price can reach $50 per barrel, included in the Russian budget for 2016, said Polishchuk.

According to the plans of Russian oil companies on oil transportation via the system of Transneft in 2016 export of Russian oil this year may decline by 6.4% to € 215.8 m tonnes, said in January the Vice-President “Transneft” Sergey Andronov. Through the system of Transneft transported almost 90% of oil. Preliminary applications of the companies are prepared according to conservative projections and for the year may change, warned in an interview with “Vedomosti” Deputy energy Minister Kirill Molodtsov. Last year oil exports from Russia exceeded the level of forward-looking applications for 16 million tonnes.

Coordinated production cuts by oil producers by 1 million barrels. a day would sharply reduce the uncertainty in the market, said last week the President of “Rosneft” Igor Sechin, speaking at the International Petroleum Week forum in London. But after the speech, answering the journalists ‘ question whether Russia is ready to reduce production in collaboration with other producers, Rosneft President answered the question: “do You know who is going to cut production?” According to Sechin, the imbalance of supply and demand for oil may decline to the end of 2016 by end of 2017 potential deficit of up to 0.5 million barrels. a day.

Rosneft has no plans to cut oil production, said on Monday her spokesman Mikhail Leontyev. He added that in the current environment no partners, with whom we could negotiate a joint reduction in oil production to adjust its international price. A unilateral decrease in oil production only by Russian companies does not make sense. But he stressed that “Rosneft” does not refuse to discuss with representatives of the state scenarios for reducing production.

At the meeting in the energy Ministry, representatives of several major oil companies, including “Bashneft” and “Gazprom oil”, directly opposed the reduction of oil production, said the sources . “Gazprom oil” does not discuss with the Russian authorities the possibility of reducing oil production, this solution is economically disadvantageous for the company, said during a meeting with investors in early February, chief financial officer Alexey Yankevich. A source in “Bashneft” confirmed that the company has no plans to reduce production is contrary to its long-term strategy. Representatives “Surgutneftegaz” and “Bashneft” have refused comments. “Gazprom oil” on the request is not answered.

The minutes of the meeting Novak has not been signed yet, said an energy Ministry official and two managers of the oil companies. In its preliminary version (from early February), a copy of which has , no instructions or recommendations on reducing the oil production for oil or information that such plans are considered. But the document contains instructions to oil companies to March 1 of the current year list of projects, the timing of which will be revised when the price of oil from $30 (Friday Brent was worth $33,74 per barrel, and since the beginning of the year balances at $30). Most oil companies have not sent the data, said an official from the Ministry of energy. According to him, in the chart Novak and his deputies before the end of February not planned any meetings with the representatives of OPEC. The official representative of the Ministry of energy to comment on the outcome of the meeting refused.