MOSCOW, February 17. The so-called Democratic coalition, created on the basis of the party “Parnas”, decided to charge for participation in preliminary voting by selection of candidates (primaries) for the elections to the state Duma: member will be required to pay 20 thousand rubles. This was announced by the President created a “coalition” of “Central election Commission” Konstantin Merzlikin. 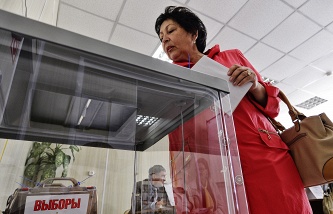 In addition, for registration to participate in primaries, a candidate needs to present a solution to one of the organizations in the “coalition” (“Parnassus, devoid of registration, the Progress Party, “Democratic choice”, “Party on 5 December”, libertarian party and movement “Solidarity”) to support the nomination. “How to decide on support of the candidate, the organizations within the coalition, will decide”, – said Merzlikin. “It goes without saying that the candidate should share the program provisions of “Demolitia,” he confirmed.

The nomination of candidates is made until April 10.

Elections to the state Duma of the seventh convocation to be held on 18 September 2016. They will pass on the mixed system: 225 deputies will be elected on party lists and 225 – on one-mandatory districts. “Parnassus” is among the 14 parties who don’t need to collect signatures of voters for nomination of their candidates.