What decided at a meeting in Doha?

Tuesday, 16 February, in Doha the meeting of the Minister of energy of Russia Alexander Novak with representatives of the three countries of OPEC — Minister of petroleum and mineral resources Saudi Arabia Ali al-Naimi, the oil Minister of Qatar Mohammed al-Garden, and the Minister of petroleum and mines of Venezuela, Eulogio del Pino. Following the meeting, four countries reported readiness to freeze oil production in 2016 at the level of “January 2016”, if other manufacturers will join this initiative. This was reported by Novak. According to al-Naimi, freezing is planned for 11 January. Then may follow next steps to stabilize prices “in the next few months.”

The representatives of Venezuela, Iran and Iraq are set to meet on Wednesday in Tehran, said the Agency Sputnik, the representative of the Iranian oil company NIOC. However, Iran is not going to reduce its market share, said the Agency Shana, oil Minister of this country, Bijan Zanganeh. Iraq is willing to freeze oil production at the January level, if such an agreement is concluded other major oil producers, told Reuters a source in the Iraqi Ministry of oil. Source Bloomberg in Kuwait said the OPEC member also agrees to freeze oil production at 3 million barrels. a day.

What do you mean this arrangement?

So far, nothing. A source in one of the major oil companies said that the selected date is very good for freezing extraction. “On January 11 was one of the highest production levels, in order to save, doesn’t need to bother”, he said. According to the International energy Agency (IEA), the largest producer among the OPEC countries — Saudi Arabia in January 2016 mined 10.2 million barrels. day: slightly less than at the peak in June of 2015 to 10.5 million barrels. a day. Russia produced approximately 10.9 million barrels. a day in January, this record in the post-Soviet era. If production in 2016 will be an average January, its volume will reach a record 552 million tonnes (in 2015 was 534 million tonnes).

Russia and Saudi Arabia are close to historically high levels of production, says the analyst of Gazprombank Alexander Nazarov. “According to the Central dispatching management of FEC, in January we had the historical record, that is, production is already at maximum. Now the critical reaction from other manufacturers that did not participate in this meeting, but to participate which called it Iraq and Iran. They planned to increase production this year”, — the expert specifies.

“The agreements — these are baby steps, especially when you consider that OPEC could not agree on the establishment of even a nominal ceiling [of production] at the meeting in December, says the Deputy Director of Department of news and analytical information on the oil markets of Europe and Africa Platts Paul Heekin. — The situation remains deadlocked, and remains [of Saudi Arabia and Russia] will be very difficult to reduce production, because other manufacturers are not going to subsidize additional barrels from Iran”. It is only freezing the current level of output, but not the reduction, that is the excess that is on the market now is 1.5 million barrels. a day, will remain, adds senior analyst in oil and gas sector “Aton” Alexander Kornilov. 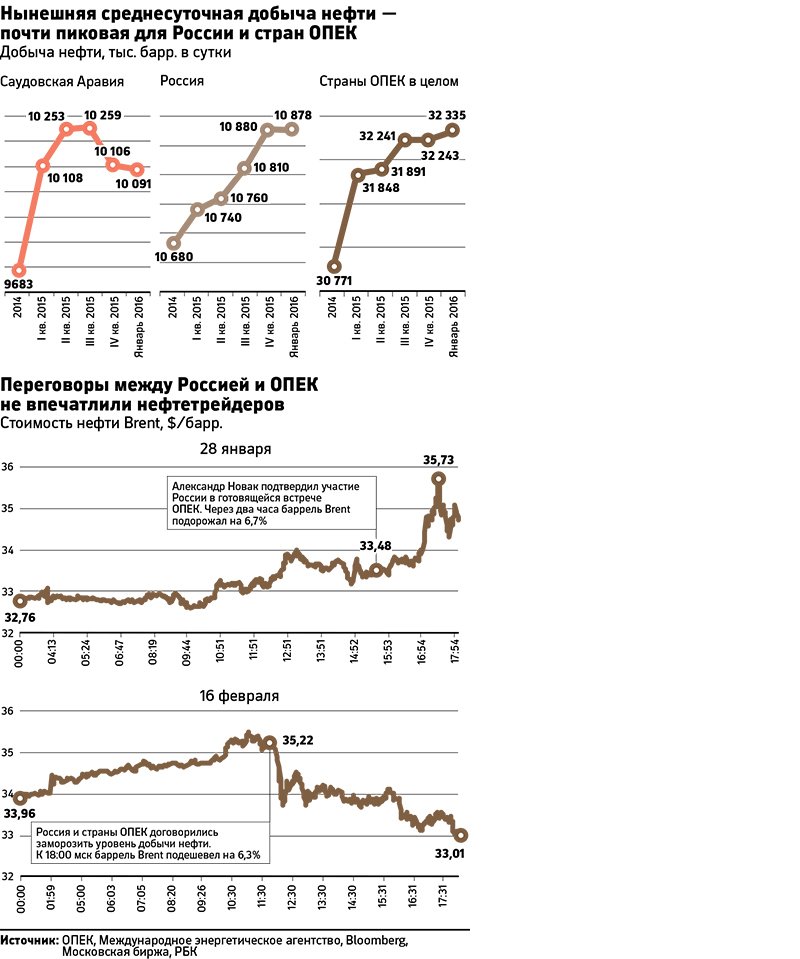 How will this affect oil prices?

On the news about the negotiations between Russia and the three countries of OPEC, the price of Brent crude on the ICE stock exchange increased by almost 6.5%, to $35,54 per barrel. But then the correction, according to 19:00 Moscow time the prices fell by 2% to $32,7 per barrel.

Oil prices in the short term will continue to fluctuate at low elevations, says Israeli Professor University. Bar-Ilan Yossi Mann. In his opinion, the stability of the agreement may depend on the situation in Syria, where Moscow backs President Bashar al-Assad, and Riyadh — his opponents. “Traders don’t trust the information on the agreement between OPEC and other exporters — they’ve heard of such agreements many times, but in the end nothing happened,” concluded Mann.

I wonder how will behave the US, where it can increase production of shale oil when prices rise, for example, to $40 per barrel, adds analyst Sberbank CIB Valery Nesterov. Today’s decision has short-term implications for the market, and it is premature to talk about what began the process of recovering prices, the expert concludes. “If the decision to reduce production, it will be very effective for the oil market in General and for the Russian budget, — says senior analyst at UBS Maxim Moshkov. — The meeting in Doha was a surprise, so waiting for real solutions to the price grew, but because they had not been accepted, the price fell again”.

According to chief expert of the Center for economic forecasting of Gazprombank Yegor Sucina, unless there is growth in US production and increased exports, to the middle of the year can be achieved, the balance between supply and demand. “In this case, the oil price can reach $40-50 per barrel”, — the expert said in an interview with .

On Tuesday, Russian oil companies have been reluctant to comment on the Novak agreement with the Ministers of the three countries of the OPEC from-for absence of details. “We don’t know the terms, don’t know on what conditions agree to freeze production of Russia, don’t know what other market participants”, — said the press-Secretary of Rosneft Mikhail Leontyev. “We have repeatedly expressed our position: the configuration of interests and positions of participants of the market are such that the reason for the fact that it has reached an agreement, we don’t see,” he added. Production volume for the company is determined solely by the economy of the projects and the availability of technological solutions, says a source in LUKOIL. The issue of compulsory production decline will be considered only if that instruction “goes to the top,” he noted.

As the agreement of Russia and OPEC will affect the ruble?

About Novak’s trip to Doha said on Bloomberg, in anticipation of the decision on the reduction of oil production, the ruble was stronger (23:40 the dollar has lost 1,05 RUB down to RUB 76,95). At the beginning of the trading session on the Moscow exchange on February 16, the ruble again began to lose its positions against the dollar since the beginning of day the dollar has risen by 73 kopecks, to RUB 77,64 “Hints to reduce oil production the market is not heard”, — says the analyst of Nordea Bank Dmitry Savchenko. “The players are disappointed with the results of the meeting of OPEC countries and continue to buy the dollar against the ruble,” — says the trader “Renaissance Capital” Levon Atanasyan. Some analysts do not exclude strengthening of the ruble in the medium term. “Stabilization of the production level can lead to a rise in oil prices to $40 per barrel, which will allow the ruble to strengthen to 72 to 74 rubles per dollar,” does not exclude a leading analyst of PSB Dmitry Gritskevich. According to him, this will happen when other manufacturers will join this initiative.

As before Russia agreed with OPEC?

There the story is not very productive cooperation between OPEC and Russia in the past, as well as an extensive history of non-compliance on various production limitations (quotas) and technical difficulties in tracking the implementation of those agreements in the OPEC, Mr Nesterov says. In 1999, amid prices fall to $10 per barrel, Russia, OPEC countries, joined by Mexico, Norway and Oman reached an agreement on the reduction of total oil production by 2.1 million barrels. a day. Moscow took on the commitment to cut production by about 100 thousand barrels. per day, about 7% of production. But, as noted last week, experts at the Oxford Institute for energy studies, Russia the promise is not fulfilled: according to BP, production at year-end has only increased, with 6,17 million to 6.2 million barrels. a day.

In 2008-2009 OPEC and Russia tried to coordinate production cuts amid falling cost of a barrel of oil from $147 to $39 in six months. The then Deputy Prime Minister Igor Sechin even came out with an initiative to unite the efforts of all countries — oil producers, OPEC, suggesting a mechanism of regular contacts, exchange of analytical information. Then, however, OPEC countries decided not to accept the offer. The Russian proposal on the world oil market has increased by 700 thousand barrels. a day.

OPEC is still in 2011 established a quota for its members at the level of 30 million barrels. a day, but this restriction is not observed — in fact, the members of the cartel extracted 31.5 million barrels. a day. At the last OPEC meeting in December 2015 has not been decided under the new quota, but the rumors that she will rise to the actual level of oil prices once again collapsed.

OPEC includes 13 countries producing oil; the largest — Saudi Arabia, Venezuela, Iran and Iraq. The aggregate production of OPEC countries rose for 2015: average production increased during the year with approximately 31,85 million to 32.2 million barrels. a day, according to the cartel. Statistics for the first month of this year shows that the increase in the production of member countries of cartel continues: in January compared with December last year it had grown to 130.7 thousand barrels. a day. Saudi Arabia, which accounts for about a third of the production of all OPEC countries, by the end of the year, on the contrary, slightly reduced production in January of this year it produced an average of 10.09 million barrels. a day from OPEC.

With the participation of Alexander Artemyev, George Peremitina, Alberta koshkarova