MOSCOW, February 17. Work on a new resolution of the UN Security Council on the DPRK goes on, however, Russia has not yet received a text of the document. This was stated on Wednesday by the Director of the First Asian Department of Russian foreign Ministry Andrey Kulik.

Nuclear test in the DPRK 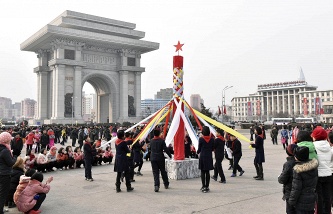 The Chinese foreign Ministry: UN resolution on DPRK must to force Pyongyang to abandon nuclear weapons

“Over the DPRK resolution work, he said. – Us draft resolution has not officially passed.” Referring to the time of adoption of this document, Kulik noted that “while about it to speak early”.

January 6, Pyongyang informed about the successful test of a hydrogen bomb. This statement caused great concern to many States, and in the UN security Council on the same day stated that it would accept the resolution with “significant new actions” in response to the actions of the DPRK. And on 7 February, the DPRK announced the successful launch of the carrier rocket with the satellite and its launch.

In recent years the DPRK has conducted three nuclear tests: 2006, 2009 and 2013. In response, the UN security Council has imposed on Pyongyang’s various sanctions. Over the past two years, the Republic of Korea not conduct nuclear tests, limiting the launch of ballistic missiles in response to large-scale military exercises of the Republic of Korea and the United States.

It is expected that the resolution will provide for the extension of the existing sanctions regime against the DPRK, which includes targeted measures against persons and entities associated with missile and nuclear programmes, as well as a ban on the transfer of technologies and the supply of luxuries.