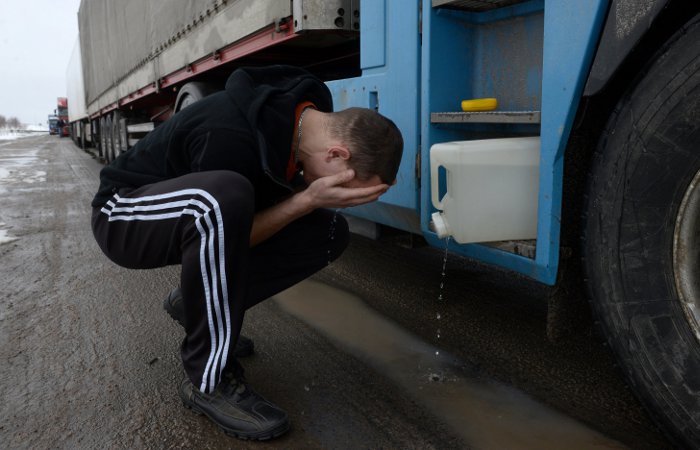 Moscow. 15 February. Political tensions between Russia and Ukraine could not fail to affect economic relations between the two countries, but in the last few weeks its consequences have affected the industry that cooling of international relations typically relate weakly, and transit road.

At the end of 2015, the parties were unable to agree on the exchange of permits for road transport, which led to them full stop from 4 January 2016. Continued to work only transit carriers on the route Ukraine – Russia – Kazakhstan-Russian President Vladimir Putin issued a special decree regulating their activities. With the introduction of international transit road transport of goods from Ukraine to Kazakhstan through the territory of the Russian Federation carried out from the territory of Belarus. Drivers are not allowed to cross the Ukrainian-Russian border, but I can call in the territory of the Russian Federation through Belarus, subject to the availability of accounting vouchers and special identification means (seals).

Finally, on 11 February, the Association of international road carriers (ASMAP) has announced that Russia and Ukraine finally agreed on a transit transport of goods and passengers. However, on the same day in ten regions of Ukraine activists began a campaign to block the passage of trucks with Russian numbers.

In response to this the Cabinet of Ministers on Monday decided to suspend the transit movement of Russian trucks through the territory of Ukraine. Kiev decided that the Russian Federation unilaterally violated the rules and procedures of the world trade organization and unilaterally stopped the passage of Ukrainian goods vehicles through its territory. MFA of Ukraine has sent Russia a note with the requirement to explain their unlawful actions.

In turn, the Russian side also took the opportunity to accuse Ukraine of violating WTO rules. “As for vehicles that are in transit through the territory of Ukraine, article 5 of the WTO, Ukraine must ensure free transit. Accordingly, the fact that she now does, there is probably signs of violations,” – said Monday the Director of the Department of trade negotiations Ministry of economic development Maxim Medvedkov, commenting on the question whether WTO regulations in the scandal with the prohibition of the transit of trucks.

At the highest level

Finally, the problem of motor carriers has reached the level of leadership of the country. The Kremlin has called outrageous the situation with transit of Russian trucks through territory of Ukraine and did not rule out new action if this issue is not lifted.

“It is absolutely outrageous, when with the connivance of the authorities in Ukraine such chaos going on in relation to our carriers. This, of course, is unacceptable,” – said Monday the President’s press Secretary Dmitry Peskov. “We believe that the Ministry of transport of energetic measures are being taken to change this situation and to ensure adequate response in the event of an unwanted continuation of this crisis situation,” he said, Recalling that Russia has already gone on “forced countermeasures, which announced the Ministry of transport”.

Thus Peskov noted that so far no information is officially announced by the government of Ukraine’s decision to stop the movement of the Russian trucks. “I don’t know about it, I don’t know what it is. But in any case it is absolutely contrary to international law, the principles of the international organization, which is engaged in international transport. This is in any gate not climbing” – said the press Secretary of the President.

Prime Minister Dmitry Medvedev at a meeting with Deputy Prime Ministers has asked the government to continue acting to unlock the Russian trucks in Ukraine and the retaliatory measures until, until this happens.

According to Deputy Prime Minister Arkady Dvorkovich, Ukraine is currently stopped about 100 Russian trucks, with about 500 more are not able to enter the territory of this country from the EU.

On Monday, the Ministry of transport and Rostransnadzor started to publish data on the detention of the trucks by Ukrainian carriers. So, as of 14:30 was delayed 161 motor vehicle. Rostransnadzor inspectors were on record with a list of cars and put the cars on spetsstavki.

The Ministry also noted that as at 15:00, and the movement of Russian trucks in Ukraine remained difficult, “it is impossible to enter the territory of Ukraine from the European countries.” “There is congestion at the border with the Republic of Lithuania in connection with the restriction of the transit of Russian transport to Europe, since currently Russia and Poland exchanged their permits to truck traffic”, – stated in the message.

As was said by the Deputy Minister of transport of Russia Nikolay Asaul, the Russian side expects explanations from Kiev. He explained that the Russian ban on the Ukrainian movement of trucks in Russia will last as long as Moscow does not receive information about the terms of the movement of Russian vehicles in Ukraine and through its territory. “While such formal responses we received, although a formal request was sent immediately after receiving information about the first facts stop. We expect that this solution (official answer from Ukraine) to be held literally in the course of the day. We receive information from the Ministry of infrastructure of Ukraine, the Cabinet of Ministers produces a corresponding decree on this subject,” added the Deputy Minister.

Later on Monday, the Minister of infrastructure of Ukraine Andriy Pivovarsky has said that Ukraine has begun technical consultations with the Ministry of transport of the Russian Federation. “I hope that in the near future will be developed informed decision on this subject,” he said.

The Minister noted that the shares of Ukrainian public activists to attempt to block the Russian trucks are not breaking the law: according to him, such actions in Europe. Meanwhile, brewer stressed that the restriction of Russia, Ukrainian transit is a direct violation of international law.

Fuel to the fire complications of transit of Russian trucks through territory of Ukraine poured the simmering conflict with Poland. The situation with the permits autotransportations between Russia and Poland intensified after the introduction in Russia of legislation, enhanced control over international road transportation and to tighten requirements for foreign hauliers in terms of drawing traffic. This led to the fact that the Polish side in the negotiations required to increase the number of permits to their carriers and the cancellation of new legislation, meeting opposition from the Russian side.

The Association of international road carriers (ASMAP) were declared “destructive” position of Poland in negotiations on the exchange of bilateral permits for trucking between the two countries. Russia and Poland were negotiating on the sharing permissions for 2016 and the medium term “because of the three-year period preceding the agreement on the Russian-Polish contingent permissions”.

The Association pointed out that the meeting in Svetlogorsk the Polish delegation “virtually ceased participation in negotiations in two hours after they began and refused to discuss the contingent permissions”.

Later, the Ministry of transport of the Russian Federation invited the Polish side to extend the validity of permits for 2015 international road transport between countries before 15 January 2016, but by Monday the issue with permits and has not been resolved.

The European Commission thus decided not to intervene in the dispute of Poland and Russia. Commissioner for transport Violeta EU bulk said the Minister of infrastructure and construction of Poland Andrzej Adamcikova that could do little in this matter.

Nevertheless, the European Commission spokesman Jakub Adamowicz said that due to the lack of direct agreements between the EU and Russia on the issue of trucking are regulated by bilateral agreements, in particular between Poland and Russia. “We urge both sides to continue these negotiations with the goal to quickly reach a settlement of this dispute, because we want to keep trucks moving without obstacles between Poland and Russia”, – said the press Secretary at the briefing in Brussels. Adamovich assured that the European Commission is ready to provide any assistance deemed necessary in this situation.

This situation has led to almost a full stop of transit of trucks through the territory of Ukraine, as well as the gradual cessation of automobile communication between Russia and Poland, which actually leads to land Russia’s isolation from the rest of Europe.

“Alternatives in this case: either the attraction of the Belarusian and Baltic carriers, or the use of sea routes. But in any case, this will lead to an increase in the cost of transportation of each the eighteen-wheelers on 300-500 euros. Belarusian carriers is now closed the problem with the Russian-Polish permits and physically cannot provide transportation in the right amount to resolve the situation with the Ukrainian transit”, – noted the General Director of FM Logistic Customs Alexey Misailov.

Thus, according to the Association of international road carriers in Poland, the first day of downtime cost the Polish transport industry about $1.5 million Daily, noted in the Association, to Russia from Poland drove an average of 600 trucks. Each of them, transporting the goods, earned on average 2.5 thousand euros per day.

Baltic and Belarusian border guards have recorded the growth of vehicle traffic on its direction – carriers change routes for trucks, redirecting them to bypass Poland, Belarus and the Baltic States and then by ferry to Germany and Sweden. The Deputy head of Ministry of transport Nikolay Asaul also called a ferry service one of the alternative ways to bypass Poland and Ukraine.

C February 21 is scheduled to launch ferry “Baltiysk-Sassnitz”, which will be used for transporting cargo vehicles with regularity three times a week.

According to the CEO of Agency of highway transportation of the Alex Dual, the organization of ferry crossings “today is a very important issue for the industry of international transport, in the situation when for two months the Russian delegation could not find a compromise with the Polish side”. “But the political situation today is such that long-term plans based on Western partners cannot. Therefore, in my opinion, it is necessary to approach this issue more seriously in the long term. We need to have an independent alternative route to Germany by ferry, which could ensure the passage of at least strategically important goods,” he said.