ASTRAKHAN, February 17. /Corr. Elena Porotikov/. Kamyzyaksky fishery in the Astrakhan region began to produce “Caspian sardines in oil” – analogue of the well-known “the Riga sprats”. This year Astrakhan products will appear in Russia, said the President of the fish processing company “Kaspryba”, which includes the plant, Andrey Markin. 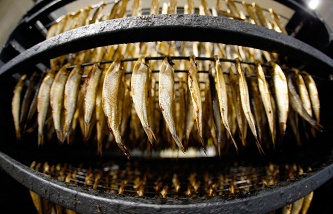 “Began to produce Caspian sardines in oil is an organic analogue of sprat. While a bit manufactured, from 30 to 50 thousand cans per month, but the contracts have already been signed with major retail chains of Russia, so our production this year will appear on store shelves,” – said Markin.

According to him, the Astrakhan production includes only the Caspian sprat, which because of the shortage until have to buy in Dagestan, as well as oil of the highest purification and salt. While in taste in comparison with the Caspian sardines “sprats just relax,” assured Markin.

“From a technological point of view the Baltic sprat in the Baltic is dried with smoke, and not always those which are required by GOST. Our Caspian and dried with steam of high pressure, so harmful substances like carcinogens in it, zero,” – said the President of the company.

He added that the production managed to establish thanks to the modernization of the Astrakhan plant, in particular, were imported kilkunastoletnia machine and blancher.

According to the regional Ministry of agriculture and fisheries fishing is the base for many villages in the lower Volga, 72 enterprises engaged in the fishing industry, more than 120 are engaged in aquaculture. Among the river fish valued bream, carp, crucian carp, catfish, roach. Astrakhan fish is sold fresh or frozen, for processing at canneries. Canned fish products are supplied to many regions of Russia. In 2015, according to operational data, the fish catch increased by 13% and amounted to 43,5 thousand tons, total fish production increased by 10%.