MOSCOW, February 18. Deputies from the liberal democratic party of Russia has prepared the bill forbidding to demolish the unauthorized construction objects in Moscow without a court decision, it will be submitted to the state Duma before the end of this week. About this newspaper “Izvestia”. 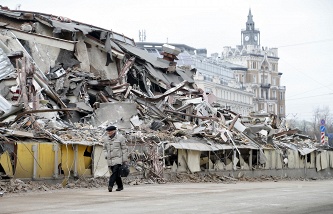 “Without going into the question of good or bad, right or wrong, we, the legislators, want to ensure the rights of citizens to protect their property. And introduced an amendment stating that any squatter – house, tent, garage, stall can be demolished only by court” – leads the publication the words of the head of the Supreme Council of LDPR Igor Lebedev. In the explanatory note to the document proposed “to limit the possibility of demolition of unauthorized construction solely by the decisions of the courts” in order “to exclude the possibility of arbitrariness of local authorities”. It is also reported that a measure of responsibility for violation of the law on the demolition of buildings has not worked.

The authors of the document declare that recent events in Moscow have exposed a very serious problem – the right of property, guaranteed by the Russian Constitution should not be violated. “While lawmakers recognize that their initiatives have virtually no chance at adoption – “at least now”, – reports the edition.

“Night big buckets” in Moscow showed that the officials for many years turned a blind eye to these structures and abnormalities. The party believes that a similar practice could spread to the regions and to cause serious social tension”, – leads edition the words of one of the authors of the bill Yaroslav Nilova. 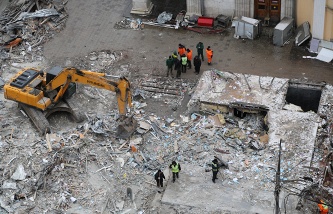 Moscow authorities have explained where the capital came from the squatter

Large-scale demolition of the retail pavilions that the city authorities have recognized the squatter, began in Moscow on the night of 9 February. Then was initiated the dismantling of the 97 objects. The demolition of 85% of the buildings have already been completed, with half the sites removed all debris. All are to be demolished 104.

The mayor of Moscow Sergey Sobyanin, answering questions on the demolition of unauthorized construction on his page in social network “Vkontakte”, said that the city government has a goal to make the city “modern, beautiful, comfortable and safe.”

“With this purpose we have removed the ugly outdoor advertising, get rid of the clutter of kiosks, landscaping, pedestrian streets, yards, Parking lots, gradually freed Moscow sky from the web of wires. This job requires consistency and determination,” said Sobyanin.