VIENNA, 18 February. /Corr. Mikhail Shcherbakov/. Investment in the construction of the gas pipeline “Nord stream-2” will be about €10 billion Such data results in the Austrian petroleum company OMV, which is part of an international consortium, operators of the project. As explained by CEO Rainer Seele, Austria is planning a project to consolidate their position as a major player on the Central European gas market. 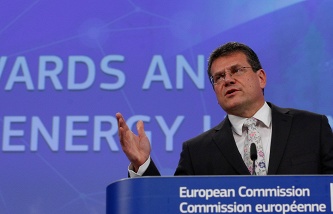 Sefcovic: EU Commission in the coming days will decide on the “Nord stream-2”

In OMV I hope that “Northern stream-2” will be commissioned by the end of 2019. Estimated Seele, project for OMV will be financially attractive. “We are investing in the project with reliable and high level of profitability, its economic expediency is amazing,” he told reporters ahead of the publication of the updated strategy of the company.

“Much of the gas coming in the gas distribution point of Baumgarten. This will retain our strategic role in supplying South East Europe,” added Seele.

The OMV Board member Manfred Leitner noted that the company in the coming weeks pending decision of the Polish anti-monopoly regulator in relation to the “Nord stream-2”. Previously Vice-President of the European Commission on Energosoiuz maroš Šefčovič said that “in the coming days, in very very near future will be a decision on this issue”.