MOSCOW, February 18. Increased attention of Russia to the East does not mean abandoning the development of relations with the West. This was stated by Vice-Premier Dmitry Rogozin, speaking at the tripartite meeting of the intergovernmental Commission Russia, Belgium and Luxembourg. 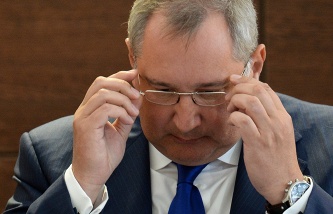 Rogozin: Russia calls for speedy restoration of economic relations with the EU

“We often hear that Russia is supposedly turning its back on Europe, looking for new business partners, offended Europe turned towards Asia. It is not so, – said Rogozin. Is we can’t afford even due to the fact that we have a coat of arms – the heir of Byzantium, two – headed. One head looks to the East, the other West.” The Deputy Prime Minister quoted the words of Peter Stolypin that if you cut off the head, looking to the West, then the eagle turns finally to the East, he will bleed to death.

“Our active policy in the Asia-Pacific region began not just yesterday and not in response to sanctions, but a few years ago,” said Rogozin. “We are actively working on this direction, it is imperative for us to develop the East of the country, a huge area is the Ural mountains, extremely rich,” said he.

Vice Prime Minister stressed that Russia and the EU are equally interested in cooperation with countries of the East, not only with China or India. He added that such logic at the Foundation of the EAEU.

“In this context, we believe that the development of Russian – Belgium and Russian-Luxembourg cooperation will contribute to new opportunities offered by the single economic space within the Eurasian economic Union, essentially creating a powerful and attractive to businesses and investors center for economic development, the common market, which can be shared with the Belgian and Luxembourg businessmen”, – said Rogozin, adding that Russia is interested in expanding the activities of the European companies in the country and ready to provide the most comfortable conditions for doing business.