MOSCOW, February 18. The Communist party is not going to negotiate with other parliamentary parties, not to stand against each other strong candidates in single-mandate constituencies. This was stated by first Deputy Chairman of the Communist party faction Sergei Reshulsky. 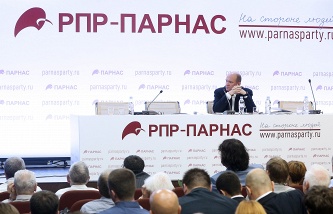 Pligin: the Committee will suggest the state Duma to consider candidacy in the new CEC on February 24

“No one, no did not negotiate and is not going to. We have a plan for the preparation and conduct of the election campaign, we have 225 districts, and to exchange someone for someone no one is going,” Reshulsky said at the faction meeting.

Earlier in a number of publications have appeared that the four parties represented in the Duma, have agreed to consolidate each for a ten single-member districts in which the other parties to the agreement will not nominate candidates. However, the first Deputy Chairman of the CPRF Central Committee, first Vice-speaker of the state Duma Ivan Melnikov said that the Communist party has prepared the candidates for nomination for election to the state Duma practically all single-mandate constituencies and not going to remove them, giving in a particular County other parliamentary parties.

For its part, the state Duma Deputy Alexander Burkov, who oversees the “Fair Russia” the preparations for the elections, in an interview with some media initially made a reservation that does not see sense in such arrangements. In an interview he confirmed that “any negotiations leading (the leader “Fair Russia”), Sergey Mironov with the front and respectively with other parties”. The Secretary of the General Council “United Russia”, Deputy Duma speaker Sergei Neverov on his page in Facebook called representatives of “Fair Russia” and the Communist party is open to inter-party dialogue on a possible “breeding” in single-mandate constituencies strong candidates in the elections to the state Duma.”The format of the discussion it was suggested not by us. And we believe that this inter-party dialogue should be open,” said Neverov, noting that all parliamentary parties, including the Communist party and “Fair Russia”, such a format of interaction “was already in the framework of elections of the higher officials”.

Elections to the state Duma of the seventh convocation will be held on 18 September under a mixed system: 225 deputies will be elected on party lists and 225 – on one-mandatory districts.