MOSCOW, February 18. The recruiters in the ranks of the terrorist group “Islamic state” (IG, is prohibited in Russia) appear in all Russian regions, warns the head of Federal Agency on Affairs of nationalities (FADN) Igor Barinov. 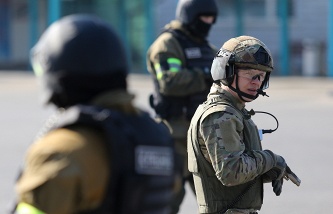 “We fix… increase in the number of recruiters in the ranks of DAYS (IG) in the regions not previously observed in the presence of some radical Islamists,” he said in an interview with “Izvestia”.

“And there should be a huge preventive work of FADN Russia and law enforcement agencies to prevent increase in the number of supporters of this terrorist organization,” he said.

However, he urged local authorities to carefully explain. As an example the President cited the situation in Dagestan after the superstructure has closed the mosque where he preached the Salafi branch of Islam.

“The staff of our office for almost a week spent in Dagestan, thoroughly analysed the situation. Correct in meaning, but not the correct form of the action of local authorities has led to the fact that 5 thousand people took to the streets,” – said the head of FADN.

“Residents and parishioners have to explain why it is needed to change the Imam, why temporarily closes one or the other mosque. Need more preliminary work, which required the participation of FADN Russia,” he said. “According to police in the mosque, which was closed, were recruiting in the IG,” – said Barinov.