MOSCOW, February 18. The Kremlin condemned the attack in Ankara and expressed condolences to the families of the victims.

“In the Kremlin condemn in the strongest terms the terrorist act that happened yesterday in Ankara and condole with the families and friends of those killed and wish a speedy recovery to those who were injured in this bombing,” said the press Secretary of the President Dmitry Peskov. 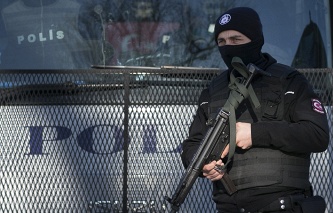 In Turkey there was an explosion near a military convoy

Media: one of the leaders of the PKK stated that she did not know who detonated the bomb in Ankara

The Russian foreign Ministry: terrorist attack in Ankara points to the need for unity of all Nations in the fight against terror

A Kremlin spokesman said that “yesterday at a press conference with Hungarian Prime Minister Viktor Orban President (Vladimir) Putin told that to combat the challenges we face – yesterday, it was made in the context of the influx of refugees (from the Middle East to Europe), primarily to solve the problems that stand at the origins of the crisis that we all now observe in the region”. He said that it was “on the immediate aftermath of the disintegration, destabilization of a number of States, providing unity, stability and security”. “The President underscored that it is necessary to fight terrorism”, – said Peskov.

As a result of the incident on Wednesday evening terrorist attack in Ankara, 28 people were killed, 61 were wounded. Most of those killed and injured – representatives of the Turkish armed forces. However, in the area of the explosion were civilians. The explosion took place in a fairly busy place at the end of the evening rush hour near the city center in the area of military dormitories.