VILNIUS, February 19. /Corr. Vladimir Ivanov/. In Lithuania at checkpoints (a checkpoint) on the border with Kaliningrad region of the Russian Federation once again increased Queuing of heavy vehicles. About this informed the Deputy head of the Directorate of the crossings of Rimantas Satkauskas.

“The number of pending border-crossing trucks in comparison with the situation on Wednesday and Thursday increased again, but the situation is under control,” he said. 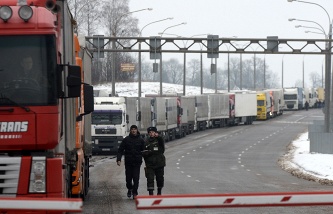 At the checkpoint “Kybartai” in the queue are about 90 trucks with a projected waiting time of 15 hours. For the first time since the increase in early February, the transit flow of trucks through Lithuania queues also formed at the checkpoint “Panemune”. Through both of these points transportation to Kaliningrad region. “The drivers are monitoring the situation and choose the optimal, in their opinion, the routes,” said Sarkauskas. According to him, Lithuanian service coordinate the work with their Russian counterparts, so we hope that before the critical situation will not worsen.

Remain in line at the border with Belarus. For the most popular CAT “that time” there are about 160 trucks with a projected waiting time of 15 hours.

About the freight between Russia and Poland

February 1 has expired permits for cargo transportation, which annually between Russia and Poland. The parties failed to reach agreement on new permissions, so the truckers of the two countries were prevented from crossing the border and transit. In search of other ways the increased stream of cars went through Lithuania.