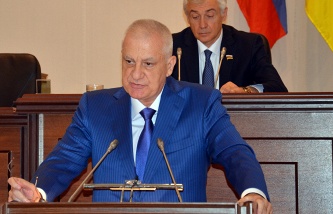 TSKHINVAL, February 19. In South Ossetia it is with great sorrow that I learned of the death of the head of neighboring North Ossetia Tamerlane Aguzarova, said President Leonid Tibilov.

“In South Ossetia it is with great sorrow took the tragic news of the untimely death of the head of North Ossetia-Alania by Tamerlane Aguzarova – gave statements Tibilov’s press Secretary Gana Yanovskaya. – In the person of Tamerlane Kimovich Ossetia has lost a wise and worthy leader, a patriot. For me personally, Aguzarov was a reliable and faithful friend”.

Earlier it was reported that the head of North Ossetia, died in Moscow in 53 year of life. In early February Aguzarov was delivered for treatment at one of the Moscow clinics with pneumonia.

Aguzarov was elected head of the North Ossetia in September 2015.