SAROV, February 19. Prime Minister Dmitry Medvedev gave a high assessment to the development of the Russian Federal nuclear center – all-Russian research Institute of experimental physics (RFNC-VNIIEF), with which he became acquainted in Sarov.

On his impressions the head of government said during a brief conversation with the winners of the government prize in the field of science and technology, 2015.

Before you take a picture with scientists, Medvedev noted that he demonstrated “unique solutions, technologically advanced and military and civilian component”.

The Prime Minister arrived in Sarov to conduct on-site RFNC meeting of the Russian information and supercomputer technologies.

Before the meeting Medvedev laid flowers to the monument to academician Yuri Khariton, founder of the Nuclear center in Sarov. The Academy was led by Khariton, VNIIEF for more than 40 years.

The dependence on import BY

The Prime Minister also expressed concern about the dependence of domestic companies on imported software, which in some areas reaches 90%. 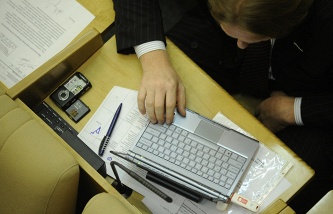 “The problem we face today is that the Russian company is still dependent on imported software”, – said the head of the Cabinet of Ministers.

The Prime Minister said that “the dependence of (companies) are different, in some areas up to 90%, according to some – we have made significant steps forward.”

“But in any case this raises a number of difficulties, especially when it comes to creating is extremely important for our country,” said Medvedev. In his opinion, “when it comes to domestic purposes, this may not be so critical, but when it comes to industrial use, this is sometimes a crucial importance”. “Either we find ourselves in a dependence on a particular software vendor or us in some situation is simply denied access. Both for the development of the economy, of course, very problematic,” – said the Prime Minister.