MOSCOW, February 19. The President of the Russian Federation Vladimir Putin proposed to oblige officials to take the oath and to impose disciplinary punishment for its violation. The relevant paragraph is contained in the list of presidential instructions completed on 26 January meeting of the Council on the fight against corruption. 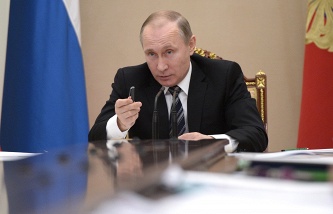 “The presidential administration of the Russian Federation… to provide, in the prescribed manner of the proposal: to introduce a procedure of taking the oath of civil servants and disciplinary responsibility in case of establishment of facts of violations”, – the document says. Date of execution of the orders until the 1st of April of the current year.

Also the Kremlin administration will have to prepare proposals for amendments in the legislation providing for the implementation by authorities of Russian regions “check the accuracy and completeness of data on incomes, about property and obligations of property character, submitted by persons holding municipal positions, and certain positions in the municipal service”.