KRASNOYARSK, February 19. Russia has no plans to reduce oil production in 2016, frosting – ready. The journalists said the first Deputy Minister of energy of the Russian Federation Alexey Teksler. 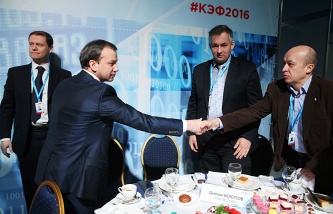 “This is not the question, we have technological characteristics (production). We have our own interests, so when making decisions, we focused on the month of January, this means that we do not plan to reduce production,” he said.

According to the Central dispatching management of fuel and energy complex, in 2015, Russian oil companies produced a record 534,081 million tonnes, which is 1.4% higher than a year earlier.

Currently negotiations are underway about the possibility of “freezing” of oil in the world. So, on February 16 in the Qatari capital Doha, Ministers of oil of Saudi Arabia, Qatar, Venezuela, included in OPEC and Russian energy Minister Alexander Novak held a meeting to discuss the possibilities of improving the price situation on the oil market. According to the Ministry of energy of the Russian Federation, the parties expressed their willingness to save, on average, in 2016 oil production at the level of January of the current year, if other countries-oil producers will join this initiative.

On 17 February in Tehran passed negotiations of Ministers of oil of Iran, Venezuela, Iraq and Qatar, who discussed the possibility of “freezing” the level of oil production. Following the talks, the Iranian oil Minister Bijan Namdar Zanganeh said that Iran would support any initiative to improve the situation with oil prices. During the negotiations Iran has taken the position that the country needs to recover market share lost during the years of sanctions.

At the same time on 18 February, the foreign Minister of Saudi Arabia Adel al-Jubayr said that the country is not ready to cut oil production. This was reported by AFP.

“Even without Iran the effect of an agreement would be”

The effect of freezing of oil production will be achieved even without the participation of Iran, but this country is interested in cooperation, said Teksler.

“Even without Iran the effect of an agreement, but Iran is, in our opinion, also might be interested in this kind of agreement,” he said.

As expected, Iran will be offered special conditions for the extraction of oil due to the fact that the sanctions, imposed on Iranian oil exports and payments for it were dropped on 16 January. Iran insists on rebuilding its desanctions market share.

According to the data which led earlier the first Vice-President of Iran, Eshaq Jahangiri, oil exports of Iran has increased since the lifting of sanctions with 1 million barrels in January to 1.3 million barrels per day currently, and in March will amount to 1.5 million barrels

The annual output can grow

Possible agreement with OPEC to freeze oil production level will not affect the production growth in Russia by 1.5% in 2016, said however, Deputy Prime Minister Arkady Dvorkovich.

According to the Central dispatching Department of fuel energy complex (SE “CDU TEK”), in 2015, Russian oil companies produced a record 534,081 million tonnes, which is 1.4% higher than a year earlier.

Oil production in Russia in January, according to the CDU TEK, amounted to $ 10,878 million barrels/ day.

The price of oil is $ 35-40 per barrel will Russia’s oil industry to move forward, said Teksler.

“I believe that if we will look at the price of $35-40 per barrel, this will allow, on average, in the course of this year the Russian oil sector move steadily forward,” he said, answering the critical question of the price of oil.

The Russian budget-2016 assumes oil prices of 50 dollars per barrel.