MOSCOW, February 19. The accusation by Turkey to Russia of war crimes absurd. This was stated at a press conference authorized the Russian foreign Ministry on issues of human rights, democracy and rule of law Konstantin Dolgov. 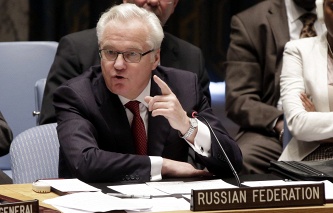 Zakharova: Russia is not against the visit of Turkish businessmen to Kazan on may forum

“Such accusations can be answered in one sentence: “the thief and the cap burns”. This reflects the essence of the situation, – said Dolgov. – We hear a lot of absurd statements that go beyond the diplomatic etiquette, these estimates are absurd and detached from the facts.”

According to him, thus Turkish politicians are trying to divert attention from the systematic gross human rights violations in Turkey.

“They continue massive strikes on the territory of sovereign Syria. This is a gross violation of the principle of the rule of law. Killed civilians, said the diplomat. – Turkey is trying “to translate arrows” on Russia.”

The other day the Prime Minister of Turkey Ahmet Davutoglu said that “the Russian ballistic missile” supposedly hit the hospital and school in Syria. On the eve of the official representative of the Russian foreign Ministry Maria Zakharova pointed out that no data indicating the involvement of the Russian HQs to the destruction of the hospitals in Syria, was not given.