SIMFEROPOL, February 20. /Corr. Alexey Konovalov/. The head of the Crimea Sergey Aksenov supported the prosecution’s request to recognize as extremist the unregistered organization in Russia, the Mejlis of the Crimean Tatars. 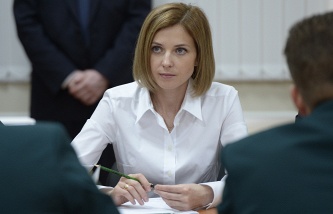 “Support actions Natalia Vladimirovna (Poklonskaya, Prosecutor of Crimea – ed.), all right. The Prosecutor’s office advocates the interests of the state. Extremist organizations exist on the territory of the Republic and the Russian Federation have no moral rights,” Aksyonov said, answering a question.

Poklonskaya 15 February appealed to the Supreme court of Republic with the statement of claim about a recognition extremist the activity of the public movement of the Mejlis of the Crimean Tatar people. A copy of the statement of claim she passed the first Deputy Chairman of Mejlis Nariman Djalalova. That, in turn, must convey the request of the public Prosecutor the Chairman of the Mejlis Refat Chubarov, who is now in Ukraine.

His claim Poklonskaya explained destructive activities of the Mejlis and its leadership. As examples, she cited an anti-government rally of members of the Mejlis, the organization of mass riots in front of the Crimean Parliament on 26 February 2014, in which two people were killed and over 70 were injured.

In Crimea the leaders of the Majlis also considered by the organizers of bombings of transmission towers on the territory of Kherson region of Ukraine, resulting in the night of November 22, 2015 the Peninsula was completely de-energized. On this fact the Federal security service opened a criminal case under article “Diversion”. The Federal investigation of this case declared the member of Parliament, former Vice-Premier of Crimea Lenur islyamov.

Russian law enforcement is currently investigating criminal proceedings against Refat Chubarov and the former head of Mejlis Mustafa Dzhemilev. They are accused of incitement to violation of territorial integrity of the Russian Federation. Dzhemilev and Chubarov declared in the international search.