MOSCOW, February 19. Turkey can act in Syria without U.S. support, since the goal of President Tayyip Erdogan is the adoption of our country’s position as a regional leader. This opinion was expressed by 19 of February in interview to TV channel “Russia 24” the head of the Federation Council Committee on international Affairs Konstantin Kosachev.

“I’m afraid that I can (to act without the US). Because Erdogan is not already allied relations with the U.S. the key to their foreign policy strategy. The chief finally was the approval of Turkey as the only regional leader… In the region Turkey, apparently, is not ready to tolerate, instructions from any party, including the United States,” – said Kosachev. 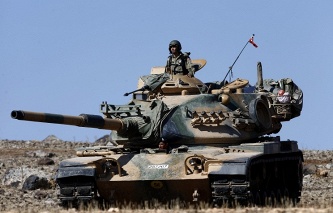 In recent days Turkey is shelling the positions of Syrian Kurds involved in the fight against gangs on the side of Damascus. This week Russia has already initiated a discussion in the UN security Council the actions of Ankara. Following the meeting, on 16 February, Council members expressed concern about the behavior of the Turkish authorities, and agreed to urge Ankara to respect international law.

On Friday, the Financial Times reported that Turkey is preparing plans for the introduction of troops in the North of Syria, and Saudi Arabia – to the South of the country, in the border area with Jordan. At the same time, according to her, the US is trying to keep Ankara and Riyadh from military action in Syria, as NATO is concerned about the prospect of deployment of Turkish troops in the country, where there are armed forces of Russia.

The UN Secretariat has expressed concern about the situation on the Syrian-Turkish border, noting that any conflict in this area can spiral out of control. “What we are witnessing on the Syrian-Turkish border, only complicates the situation and speaks about the urgent need to find a political solution, said the official representative of the UN Secretary General Stefan Dujarric, answering the question. – Any conflict along the border could spiral out of control. All parties should keep this in mind”.