ST. PETERSBURG, February 20. St. Petersburg state University will receive 213 million rubles from the trust Fund (the endowment Fund) of the University to support scholarship programs and overhaul in 2016. This was announced by Executive Director of the Foundation Eugene Pen. 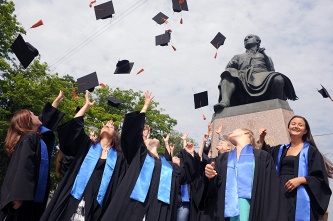 The Fund is currently based on requests from the SPSU is the financial plan for 2016. The largest volume of investments will be the development of the educational program “Arts and Humanities”. A significant portion of the proceeds will go to the commissioning of the renovated buildings Mikhailovskaya dacha, which are the campuses of the Higher school of management SPBU.

Pen said that the endowment Fund comprises 8 SPBU endowment generated funds donations, the total reached 1.4 billion rubles, The largest volume of investments – 488 million rubles were contributed to the trust capital SPBU for the development of the educational program “Arts and Humanities”, contributions to the centralized target capital for statutory purposes SPSU reached 327 million in trust capital for the development of economic faculty – 116 million for All the donations as they arrive, transferred in trust management of the management company and are invested in securities income (386 million rubles for all the work of the Fund) transferred to a University.

“The endowment funds of major universities of the world allow them to exist regardless of what it is today, in the world economic situation. The endowment Fund SPSU still isn’t, but even this year we expect that 213 million rbl. we will receive on the implementation of University projects. Graduates will be able to take an active part in the formation of this financial flow, especially because most of them are very successful people”, – said the first Vice rector of the University Ilya Dementyev.

“Patrons, guides in support of SPBU programs a significant amount of donations, we propose to use the capabilities of the University: to conduct at the St Petersburg state University scientific and training activities, access to library resources of the University to establish a scholarship,” said Pen.

The endowment Fund is a permanent endowment for use in nonprofit purposes, primarily to Fund organizations working in the field of education, medicine, culture, science. The most famous endowment Fund – Nobel, established in 1900 and serves as a source to Finance the Nobel prize. The establishment of endowment funds in Russia became possible after the adoption 30 December 2006 of the Federal law “On procedure of formation and utilization of target capital of nonprofit organizations”. The first of its kind in the Russian Federation became in 2007 a Fund to support the Moscow school of management SKOLKOVO.