MOSCOW, February 20. Moscow calls on U.S. and other NATO countries to take a responsible approach to the selection of targets for air strikes to avoid casualties among innocent people. This is stated in the commentary official representative of the Russian foreign Ministry Maria Zakharova, posted Tuesday on the Agency’s website. 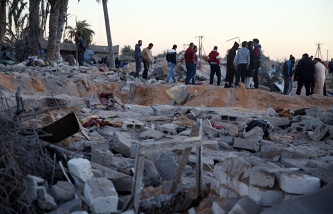 “We urge the U.S. and other NATO countries in a responsible and carefully consider the choice of purpose – as do the Russian HQs in Syria. Already far not the first time that the attacks resulted in NATO planes killed innocent people. Of course, the U.S. and its allies in the conduct of such operations shall be guided by international law to act unilaterally and to coordinate their steps with all stakeholders of the international community”, – noted in comments.

“We Express our deep condolences to the families of employees of the Serbian Embassy in Libya, Sladjana Stankovic and Jovica Stepic, who died in the bombing by US planes at the site where they were hostages of the extremist Islamic state (is prohibited in the Russian Federation terrorist group). These officers of the Embassy of Serbia were occupied by 28 November 2015. Their whereabouts was known to the Belgrade. There were negotiations about the release,” – said the Russian foreign Ministry.