BUENOS AIRES, February 23. /Corr. Elena Kondratieva/. The government of Argentina reached an agreement on repayment of debts of $250 million and €185 million ($200 million) with another group who refused the restructuring creditors. About it on Monday told a mediator in talks between Buenos Aires and creditors Daniel Pollack. 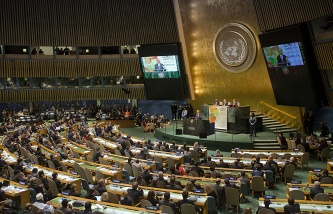 According to the newspaper Clarin, and funds Corp Lightwater, Old Castle Holdings, VR Capital, Procella Holdings and Capital Ventures International. The terms of the deal were not disclosed.

As reported on Monday the Minister of economy and Finance of Argentina, Alfonso Prat-gay, Buenos Aires to the present moment “reached an agreement with a third” of creditors challenging the debt of Argentina in U.S. courts. According to the Minister, the total debt of the South American Republic is about $20 billion For the payment of the debt of Buenos Aires intends to issue bonds for $15 billion.

In 2005 and 2010, Argentina restructured 93% of its debt, left a legacy after the largest default in history in 2001. The owners of the bonds was offered to exchange for new papers with discount about 70% compared to original cost. However, the owners of the other 7% debt securities, comprised mainly of speculative investment funds, the cancellation is not agreed.

Buenos Aires has implemented some of the payments through one of the new York banks, being thus under the jurisdiction of the American justice system. The court in new York has risen on protection of interests of creditors and ordered Argentina to pay the debt in full. Buenos Aires offered the holders of restructured bonds to receive their interest in Argentine banks, thus avoiding intervention by the court of the U.S., but the vast majority of creditors did not agree.

On 5 February the government of Argentina’s President Mauricio Macri, who took office on 10 December last year, suggested that the main group of creditors to reduce the amount of debt by 25%, two funds of the six accepted the terms.