MOSCOW, February 23. The agreement reached between Russia and the U.S. on the ceasefire in Syria will be the beginning of a more active process of resolving the crisis in that Republic. Such an opinion shared by first Deputy Chairman of the Federation Council Committee on international Affairs Vladimir djabarov in an interview with TV channel “Russia 24”. 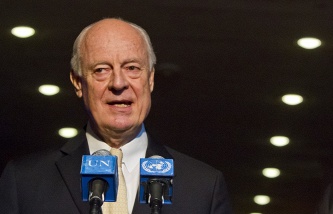 De Mistura: the agreements of the Russian Federation and the USA will quickly launch an inter-Syrian negotiations

The head of the British foreign office welcomed the agreement Russia and the U.S., ceasefire in Syria

Steinmeier: the cessation of hostilities in Syria more closely than ever over the years

“If it (the truce) will be signed on the 26th and 27th (of February) will come into force, we will begin the process, and will instantly shift and the Geneva talks on Syria, and all countries that are somehow involved in the conflict, will begin to find a common language with each other,” said the Senator.

Djabarov also noted that another important consequence of the Russian-American agreements became an official denial from Turkey to conduct a ground operation without sanctions of the UN security Council, which, according to the parliamentarian, was a threat to the restoration of peace in Syria.

“This threat (holding Turkey ground operations),… the spread and expansion of the conflict faded into the plan,” he added.

Monday night was circulated a joint statement of the Russian Federation and the United States, which States that the ceasefire in Syria will come into force on 27 February at 00:00 time of Damascus (01:00 GMT). The statement stressed that the truce apply to all parties, except terrorist groups “Days” (Arabic name “Islamic state”) and “EN-dzhebhat Nusra” (both banned in Russia), as well as other terrorist organizations recognized by the UN Security Council.

Address of Vladimir Putin in connection with the adoption of the joint statement of Russia and USA on Syria
© kremlin.ru