SAMARA, February 24. /Corr. Alexey Sokolov/. GM-AVTOVAZ from the environment to change the operating mode of the Assembly line and switches to single-shift schedule. About it reported in a press-service of the enterprise.

“Since February 24, 2016, the Assembly line will work in one shift five days (40 hours) a week instead of two-shift schedule, with production line speed will increase almost twice”, – said the press service. It stressed that the new changes will not affect the number of employees. 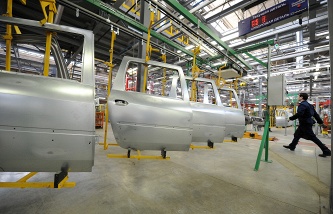 GM-AVTOVAZ starts the conveyor after a corporate holiday

The new schedule should help reduce the costs and to maintain competitiveness of cars Chevrolet NIVA in the market. Increase the speed of the conveyor to the maximum level will occur through technological improvements of production lines and restructuring of jobs.

“Thanks to the optimization and a high degree of localization of the Chevrolet NIVA, exceeding 95%, and the professionalism of the dealers of GM-AVTOVAZ in 2016 will be able to maintain their position in the automobile market”, – noted in press service.

As previously reported, on 15 February changed its work schedule “AVTOVAZ” – the carmaker for six months moved on to a four-day work week.

GM-AVTOVAZ is a joint venture of “AVTOVAZ” and the American company General Motors in Togliatti. Produces the Chevrolet Niva vehicles since 2002. Sales of GM-AVTOVAZ by the end of 2015 compared with 2014 fell by 24.5% to 34 726 cars. Production volumes decreased 24% to 34 218 pieces. Since the beginning of the production sold 606,6 thousand cars, including 44.7 thousand in the CIS countries.