MOSCOW, February 24. The state Duma Committee on constitutional legislation and state construction recommended the adoption in the second – mostly – reading the draft law on the introduction of mandatory participation in televised debates for all candidates. 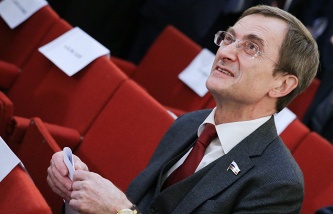 Naryshkin: PACE observers at the elections to the state Duma in 2016 in the Russian Federation “nobody expects”

To the wording of the second reading the Committee approved the amendments mainly of a technical nature.

Initially, the initiative was developed by the Vice speaker of the lower house from the faction “United Russia” Sergei Neverov. As noted in the explanatory Memorandum to the bill, proposed to establish “the necessity of participation of electoral associations and registered candidates for joint campaign events (debates) on the channels of state and municipal TV and radio broadcasting organizations”. At the same time “provides the possibility of personal participation in the debate.” “Now, as you know, debate can and (third) person on behalf of political parties. It will be excluded”, – explained to journalists the state Duma speaker Sergei Naryshkin. The bill also stipulates that in the event of a breach of requirements for mandatory participation of an electoral Association, a candidate in the debate, due to them airtime goes to the opponent (opponents).

As stated Neverov, introducing the draft law, “it is important that every citizen got an idea of who he will give his voice.” “It is necessary to create conditions for openness and competition in the elections. The debate is one of the key components,” said Vice-speaker.

The MP considers, incorrectly, “when campaigning for the party who himself is not involved in the elections”. “A required personalization of the candidate. A situation in which the candidate is hiding behind the back of others – clearly not for the benefit of our citizens. Citizens have the right to see their candidate after election and before,” says the author.

In turn, the Deputy Chairman of the profile Committee on constitutional legislation and state construction Dmitry Vyatkin said that the adoption of the draft law will enhance “the integrity, transparency, legitimacy, trust, in the end, the highest legislative body and other bodies of legislative (representative) authorities to be established”.