MOSCOW, February 24. The chair of Parnas Mikhail Kasyanov suggested that the “Apple” to create a United party that, in his opinion, is “the only possible way of forming a single list of candidates” in the elections to the state Duma. In turn, Deputy Chairman of Yabloko Sergey Ivanenko has doubts about the possibility of forming a new party six months before elections and feared that such a step might jeopardize the participation in them. 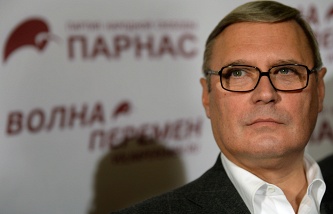 Kasyanov suggested that the “Apple” to conclude an Alliance, the leader “the Apple” does not exclude a single list

Earlier on Wednesday Kasyanov in Facebook called “Apple” to the creation of a United party. “I think the proposal to create a single batch right. I am sure that most members of the Party of people’s freedom and “Democratic coalition” would support such a proposal,” he wrote.

According to Kasyanov, “from a legal point of view such a proposal for three at our disposal (before the official start of the election campaign – ed.) month is quite realizable”. He expressed his willingness to “soon as possible” to convene the political Council of the party “Parnas” for a decision on the creation of a “United democratic party”.

For his part, Deputy Chairman of the Yabloko party Sergei Ivanenko said that he sees no such possibility. “Personally, I don’t see how this can be done six months before the election,” he said, commenting on the initiative of Kasyanov.

“There’s a lot unclear in this sentence. The procedure for creating a new legal entity for six months before the Duma elections in doubt. This could jeopardize the participation in the elections”, – he explained.

In addition, the Deputy Chairman of the Yabloko party said that “it is difficult to negotiate through Facebook”.

At the same time, he did not exclude that the initiative of Kasyanov “to discuss Congress “Apple”, which is scheduled for 27-28 February.”

Earlier the political Affairs Committee of the Yabloko called the party “Parnassus” competitor in parliamentary elections, but expressed willingness to discuss the breeding of candidates in single-mandate constituencies.