MOSCOW, February 24. The dismantling of trade pavilion “Pyramid” in the center of Moscow near the metro station “Pushkinskaya” and “Tverskaya” will be fully completed by this weekend (27-28 February). About this informed the head of the Department of trade and services of Moscow Alexey ameryk.

“After two or three days, the dismantling will be completed by this weekend the site where stood the pavilion, will be asphalted,” he said.

Earlier Mr nemeryuk noted that in place of the demolished pavilions in Moscow, recognized as unauthorized construction, does not appear new commercial facilities. “In these territories will be broken or squares, or parks, or lawns, will be public space,” he said.

The demolition of the shopping center “Pyramid” began in Moscow on 21 February, the owner decided to dismantle the building by themselves. 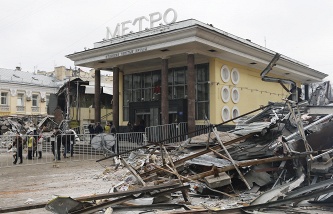 Nemeryuk: the demolition of stalls in Moscow will not lead to higher prices for products

According to all-Russian center for public opinion research (VTSIOM), two-thirds (63%) of Moscow residents support the demolition of illegally built outlets in city.