Up to 800 companies receive state support after the cancellation of a number of benefits of Special economic zone from 1 April 2016, announced Minister of economy of the region Anastasia Kuznetsova.

“According to preliminary estimates, the benefit will be available to nearly 800 enterprises and organizations of the region,” she said. Transfers from the Federal budget for 2016 exceeds 66 billion – 22% of GRP of the region, the Minister added. Another 568 million rubles allocated for compensation of expenses on rail transportation.

“Starting in 2020, this subsidy will annually decrease by 5%. We understand that no preferential treatment will not last forever, and new measures of support and subsidy is regarded as a chance to build competencies, acquire new technologies, create new jobs,” – said Kuznetsov.

Investorov for the SEZ is reduced three times

The minimum threshold of necessary investments for residents of the Kaliningrad special economic zone (SEZ) lowered from 150 million rubles to 50 million rubles. The corresponding bill approved in the second and third and final readings at a meeting of the state Duma on 24 February, reported the press service of the regional government.

The changes apply to the investment projects in the fields of tourist-recreational and sanatorium-resort activities, prevention of diseases and medical rehabilitation, the establishment of processing industries, fisheries, aquaculture, agriculture. These industry authorities consider the region in the priority areas for economic development.

By the beginning of 2016 in the field in the unified register of residents of the SEZ included 106 companies, of which eight in 2015. The total volume of declared investments – 92.6 billion rubles. The greatest number of organizations registered as residents, implementing investment projects in manufacturing industries, in transport and in the sphere of real estate operations, leasing and provision of services. Residents are entitled to exemption from tax on profit and tax on property of enterprises during the first six years of operation, and reducing the rates of these taxes by 50% in the next six years.

In 2015, the region received more than 1 million tourists, said the regional Ministry of tourism. “The task in view by 2020 to increase the flow to 5 million tourists a year. The industry shows a growth of 15-20% per year. The structure of tourist arrivals and 87% of Russians, 13% of foreign citizens”, – said the Agency. 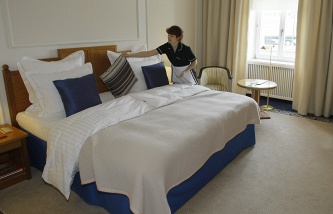 Investments in the sector for 5 years has reached 25,5 billion roubles. There are more than 50 routes. By 2020, the bathing beach in the area is expected to increase to 33 km. Developed new routes for objects of historical sites and natural parks.

Growth point – major cultural events – as the “wailing kivin”, which brought in 2015 more than 5 thousand spectators. Variety theatre “the amber Lounge” in Svetlogorsk “can be the venue of other major festivals”, experts believe.

Game world Cup 2018 also stimulate the flow of tourists. It will ensure the growth and construction in the city of Pionersky in the marine terminal for receiving from 50 to 200 vessels from 100 to 300 thousand passengers a year, according to the Ministry of tourism.

Agriculture, industry and mining of amber

Production growth in agriculture has reached 9-10% per year, according to the regional Ministry of agriculture. “For five years the volume of state support of the industry from the regional budget is increased in 4.6 times,” said there. In 2015 from the regional budget it is allocated 1,2 billion roubles – 15% than in 2014. In 2016 it is planned 1.1 billion. Taking into account Federal funds state investments will amount to 4.1 billion rubles, added the Agency.

In the Kaliningrad region, the farmers United in the Association

On the Russian market in 2017 will appear Kaliningrad apples

In the five years put into circulation 130 thousand hectares of land. The region provided with its potatoes, pork and grain. “The task for three years to double production”, – noted in the Ministry.

According to the Ministry of economy of the region, one of the leaders of industrial production of the region is the group of companies “Avtotor”. “In 2014, accounting for over 52% of the total volume of marketable products”, – reported in Department. “Avtotor” provided 48% of the regional results were impressive, 71% of container traffic. The company implements the project of creation of automotive cluster with the capacity of 250 thousand cars per year, started in 2013.

Kaliningrad amber plant provides 65% of the world market of industrial mining of amber. The annual volume up to 300 tons. By 2020 it is planned to increase to 500 tons.

From 2007 to 2015 the region with Lithuania and Poland has implemented 60 projects on cross-border cooperation programmes. “The total amount of financing amounted to 145 million Euro”, – have informed in the regional government.

Worked out the programme “Lithuania-Russia and Poland-Russia” till 2020. Autumn is scheduled to announce the call for project proposals, the source said.

The residents of the region and Poland make mutual visa-free travel under the program of cross-border traffic. Its capabilities in 2015 were used by over 4.3 million people.