KALININGRAD, February 26. Prime Minister Dmitry Medvedev hopes that Lithuania in the performance of contractual obligations will not politicize the issue of electricity supply of the Kaliningrad region.

“It is clear, that before it was made that way, now we have to focus on the current situation. The geographical position of the Kaliningrad region cannot be changed, the political risks that exist today, are really increasing,” said Medvedev, answering a question of one of participants of his meeting with activists of the Kaliningrad branch of the “United Russia”.

He expressed the hope that the politicization of the issue of energy supplies in the region will not. “We believe that there are living modern civilized our neighbors, I mean including the leadership of this Republic, which received, as you know, a good education in one place, in the same in which I once studied. I hope that any political nuances in deciding the fate of energy supply, fulfillment of contractual obligations there does not arise,” he said.

Medvedev instructed to consider the issue of alternative options of energy supply of the Kaliningrad region. 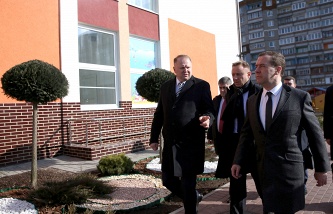 “Today I have instructed our colleagues from different agencies and state-owned companies, Gazprom, Inter – to think yet about the existence of alternative possibilities for the supply of electricity”, – said Medvedev.

“They are technologically sophisticated, they are expensive, and they are related to political decisions, in this case, foreign policy decisions, including, but not limited to questions and access to new gas pipelines and so on. Is this possible? I think we need to lead in this industry… So we are thinking about it,” he said.

The Prime Minister said that decisions already made will solve the problem of energy security in the region, but we need to think for the future.

According to him, must take the proper measures “to ensure reliable power supply to consumers in the near future.”

The Prime Minister instructed the agencies to report what needs to be done in the framework of the implementation of the roadmap and drew attention to the fact that the work on previous plans has not been implemented in a number of areas and needed to be adjusted. “This is the latest version, and the versions comply with all the Federal agencies that work in these areas”, – added the Prime Minister.