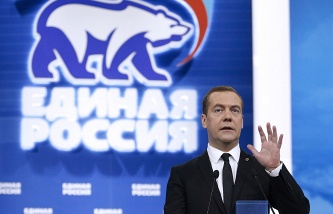 “I appeal to all: their achievements should not be shy, we will now have the election campaign”, – said Medvedev at a meeting in Kaliningrad with the regional asset of the party.

He, in particular, recalled the allocation of billions of rubles for the construction of kindergartens, noting that it is the result of joint work with United Russia, and it should be used in the campaign. “Again, who are older, remember: our ancestors, I mean in the role of the ruling party – and, in fact, it was not even the ruling party, as part of the state elite – from the Communist party, didn’t hesitate. This does not mean that you have to copy the experience of the CPSU, but some things still need to remember,” – said Medvedev.

He also reminded about the new project on construction of schools and urged him to perceive as the key important project of the “United Russia”. “Do not be shy to intervene in these processes and not be ashamed to talk about it during the election campaign,” Medvedev said.