MOSCOW, February 26. State Duma Deputy from Dagestan, Rizvan Kurbanov (“United Russia”) has submitted to the consideration of the house bill, which proposes to toughen penalties for illegal fishing and extraction of seals, sea otters and other marine mammals. Document posted in the Duma’s electronic database. In the case of adoption of the initiative, the maximum penalties for the specified crime may be increased from two to five years of imprisonment.

In particular, illegal extraction (catch) of aquatic biological resources, if it involve the infliction of major damage, with the use of motor boats or explosive and chemical substances, electric current or other forbidden tools and ways of mass extermination of living aquatic resources, in places of spawning or on migratory ways to them, in protected natural areas or in zone of ecological disaster or emergency ecological situation – shall be punished by a fine in the amount from 300 thousand to 500 thousand roubles (now from 100 thousand to 300 thousand). An alternative penalty – a fine in the amount of salary or other income for a period of two to three years, or corrective works for the term up to two years, or deprivation of liberty for a term up to two years (now the maximum arrest up to six months). 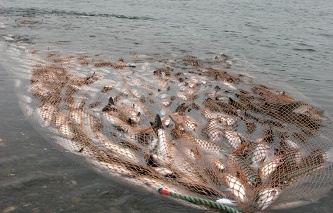 Similar sanctions Kurbanov proposes for illegal taking of seals, sea beavers, or other marine mammals on the high seas or in forbidden areas.

If the crime was committed with abuse of official position or by a group of persons upon a preliminary collusion or by an organised group or causing especially large damage, he will face a fine from 500 thousand rubles to 1 million rubles or in amount of wages or other income of a given convict for a period from three to six years, or by deprivation of liberty for a period from two to five years (now the maximum is up to two years), with disqualification to hold certain posts or practice certain activities for a term up to three years or without such. Large to admit the damage caused to aquatic bioresources, exceeding 100 thousand roubles, especially large – 250 thousand rubles.

The MP explains the relevance of the amendments that the rules do not “perform its preventive function”. “The cost of illegal export (aquatic biological resources) without taking into account unpaid taxes, levies for using water bioresources and customs duties significantly exceeds the net financial result of the Russian fisheries complex, and the missed lesion in receipt of tax deductions reaches colossal proportions,” he writes in an explanatory note. The poachers cause” significant damage to the natural resources of our country.”