According to the Federal migration service (FMS), in 2015 in Russia was issued 3,788 million passports, which is 49% lower than in 2014. In official statistics there is no breakdown on the old-style passports (with validity of 5 years) and the new generation passports (with biometric personal data, period of validity — 10 years).

analyzed statistics of regional bodies of the Federal migration service (data were collected 83 regional migration service, the total number furnished them passports 99.8% of the national figure 2015) . According to calculations , in 2015, were issued 2,572 million passports of the new generation, which is 54% lower than in 2014. Fall for the documents of the old sample were considerably less than minus 36%. 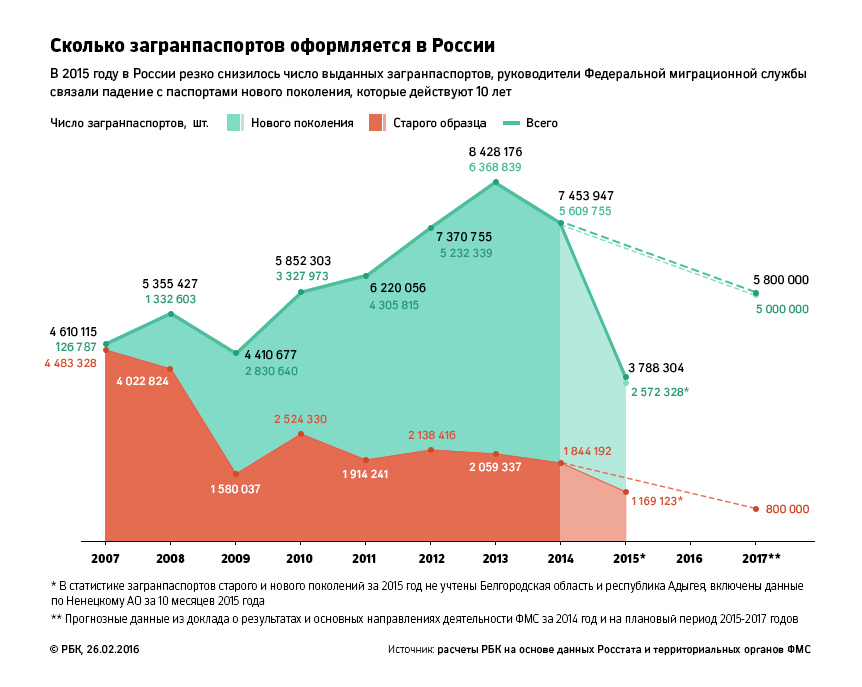 The FMS declined to comment on the sharp fall of the index feature of foreign passports in 2015. Earlier the head of Department Konstantin Romodanovsky said that the decline in the number of passports due to the introduction of documents of new generation operating for 10 years, and that the Russians in some cases rely on domestic tourism.

In the report on results and main directions of activities of FMS for 2014 and planned period of 2015-2017 projected decline in the number of passports issued in connection with the increase expire, but the figure for 2017 to 5 million documents for a new generation — almost 2 times higher than the result 2015.

Perhaps another reason for the decline in this indicator, and such a sharp deviation from projected levels, a decline in real incomes of the Russian population. At least according to the statistics collected since 2007 (see chart), the decline in the number of passports issued was observed in the post-crisis 2009-m year, and in 2014 and 2015, when the economy was in stagnation due to falling oil prices and sanctions.

The Chechen Republic was the only region in Russia in 2015 has increased the number of decorated passports — plus 18% (excluding the Republic of Crimea and Sevastopol, which became part of Russia only in the spring of 2014, so the mapping data is incorrect). 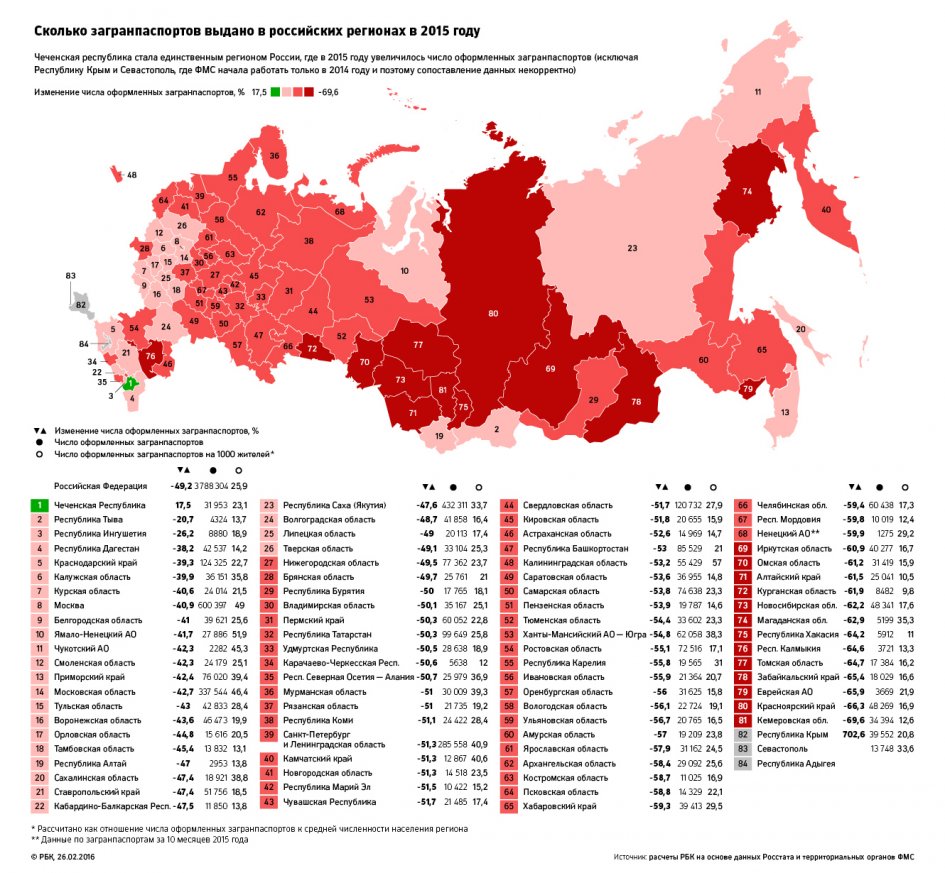 In 25 regions the index fell less than in the whole of Russia, 55 in the regions, on the contrary, above. Most number of passports issued decreased in the Kemerovo region (-70%), Krasnoyarsk Krai and the Jewish Autonomous region (-66%).

Data for the Republic of Adygeya are missing. Statistics in the Nenets Autonomous district are presented for 10 months of 2015. In the Belgorod region, there is no breakdown on the number of foreign passports old and new generations. Data of two subjects of Federation — St.-Petersburg and Leningrad region — joint, as does a single territorial administration.