The UN, on 26 February. /Corr. Oleg Zelenin/. Consideration of the proposed U.S. draft resolution of the UN Security Council toughen sanctions against the DPRK will be possible only next week. It was declared to journalists by the first Deputy permanent representative of the Russian Federation at the world organization, Pyotr Ilyichev. 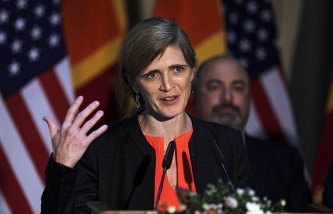 Power: the new sanctions against North Korea will be the toughest for the last 20 years

According to him, the study of the document Moscow will take time. “The project is saturated with a huge amount of detail, there are many applications that we need to analyze,” said the diplomat.

The diplomat reminded that Russia had already declared the consent to adopt a resolution in response to the DPRK nuclear test and launch missiles with the satellite. “We said that there were violations of previous security Council resolutions that there should be a response to these violations, but it needs to be adequate”, he said.
In January, Russia’s permanent representative Vitaly Churkin said that the new sanctions of the UN security Council should not lead to humanitarian or economic collapse in North Korea.

Negotiations on the text of the future resolution was conducted between the U.S. and China for several weeks. The document was submitted for consideration at the SAT on Thursday, the permanent representative of the United States and Samantha Power.

She said that the draft resolution called for “the toughest set of sanctions,” introduced by Council over the last 20 years. In particular, the document provides for the mandatory verification of all freight in the DPRK, and a ban on the purchase of the country’s coal, iron, gold, titanium and other raw materials and metals. In addition, the resolution, if adopted, will impose embargo on shipments of aviation and rocket fuel.